Architects' Guild is an Ally from Allies. When you gain a card, it allows you to spend Favors to get a cheaper non-Victory card thrown in for free, like an Ally version of Haggler

Architects' Guild is similar to Haggler, though there are many differences in how it functions. It does not stack, but can still go through multiple cards with one buy. A Province buy could get a Border Village, then a Laboratory, then an Old Map, and then a Hamlet, providing many different engine pieces. When Favors are not too difficult to get and an Engine strategy is viable, this will be very helpful.

Architects' Guild can also be used in Big Money strategies, but only to a lesser extent because Favors will be harder to get. It can gain Golds when gaining Provinces, Platinums with Colonies, and Silvers with Golds. It's power level mostly depends on how easily Favors can be taken.

Architects' Guild doesn't fit the day's theme but I am showing it off anyway. It's the Haggler

There were multiple gainers besides Crafters' Guild 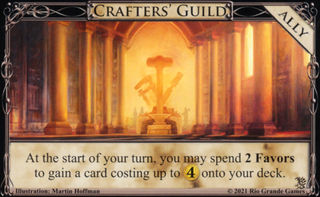 , some of them Remodel

s. Some were in the file for a while, some just briefly tested. I eventually settled on two, with the name Architects' Guild on this one. Originally it didn't say non-Victory; it always seems worth trying, but.
—Donald X. Vaccarino, The Secret History of the Dominion: Allies