Black Cat is an Action-Attack-Reaction card from Menagerie

. It lets you give out a Curse to all your opponents when one of them gains a Victory card.

Black Cat’s value in a given Kingdom is mostly tied to its Reaction, which allows it to act as both non-terminal draw and a junking attack. The strength of this Reaction is in turn dependent on how likely it is that you’ll be able to React, and how detrimental the Curses

are to your opponents. When you aren’t able to React with it (likely because it wasn’t in your starting hand, or your opponents simply didn’t green), Black Cat is much less useful, as its fallback function is only to provide terminal draw that increases your hand size by one. This is typically outcompeted by other options for draw, and so Black Cat is usually best viewed as supplemental terminal draw which you’ll need to support with some villages if you want to make use of it when you can't React. Occasionally, however, the low price can make it appealing when you have very easy access to terminal space (e.g. with Academy 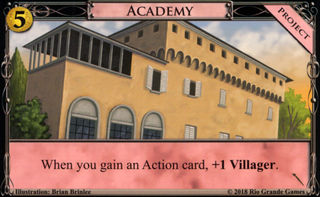 There are a few factors to consider when using Black Cat for its Reaction.

From a defensive perspective, there are also a few points to keep in mind when greening against an opponent with Black Cats. 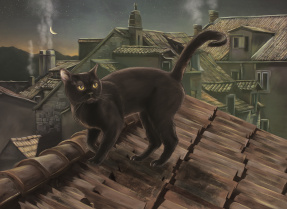 Black Cat was the first Attack-Reaction card, and it is the only Kingdom Attack card costing less than

has two minor themes I didn't mention yet. Surprise! The first one is reaction cards; there are five of them. Five! Four of them do the trick Sheepdog

did of letting you play them at an unusual time; Black Cat is one of those. It's a Witch

they have to activate for you. I will just point out now: when they gain a Province

and that lets you use Black Cat, the other players gain Curses

and that lets them use Sheepdogs

The second reaction in the set. I wanted a black cat! Probably it would curse people? Could it be blue? I got all those things. At first it triggered on their gain and you discarded it to Curse them. It wasn't good enough. Shifting it to being played also let it be an Attack; Moat

In response to people expressing confusion over being able to react with multiple Black Cats to the same gain, Donald X. responded with:

Suppose you have two Wharf

s. You draw two cards for one. Now it's not the start of your turn anymore, so you don't get the other two cards. That's how to fight that part of the Black Cat argument. You simply can't have it be that Wharf

fails there; it has to be that multiple things can happen "when x" and they all get to happen. Reactions work even if they weren't in your hand when whatever it was happened; that could have been different (e.g. reveal them all, then resolve them all) but that's how they work.
—Donald X. Vaccarino, Dominion Discord, 2021