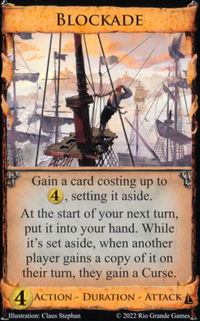 is an Action-Attack-Duration card from the second edition of Seaside. It is a gainer that also acts as a curser against anyone else who gains, during their turn, a copy of the same card you gained with it. 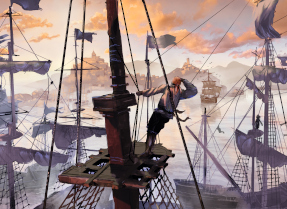 Blockade is the new Embargo

. No tokens required. And it blocks other players and not you, and they can't even get around it with Workshops

The new Embargo had to not use tokens. That was straightforward: it sets aside a card, and only Embargoes it for while the card is set aside. At first it wasn't phrased so cleverly, and you could like topdeck the card with Royal Seal

and have to remember it. Now the card has to still be set aside if you want to hand out Curses

. This card had to not provide a way to instantly hand out all of the Curses, via Embargo-ing Curse and then giving them one; it accomplished this with the "their turn" part, courtesy of Matt. Of course you can still let them empty the Curses, but they have to go along with it; and there are exotic combos, why wouldn't there be. For a while it dodged Curse

," but that wasn't great, as everyone assumed it could get

Some people like to not play with attack cards at all; have the fun you want to have. For people who think the concept of attacks isn't inherently flawed, I sure don't see a problem with Blockade.
—Donald X. Vaccarino, Dominion Discord, 2022