"Blue dog" is an in-joke used to refer to any interaction in Dominion which seems overly convoluted.

With the release of Hinterlands, many members of the Dominion community had questions on how exactly Trader (early version) 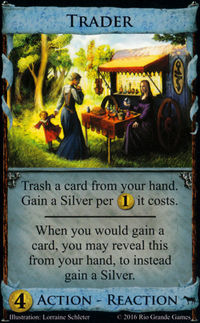 . Over the course of a long thread on BoardGameGeek, while changing his mind on the ruling a number of times, Donald X. introduced an opaque metaphor involving walking a blue dog (original post) in an attempt to clarify the interaction. This, at the time, only served to further confuse the issue, though it later turned into a fun reference to use in Dominion-related conversation about card interactions that are hard to understand.

The final ruling on the original question was that, if Ironworks is used to gain a card, but Trader is revealed to replace the Ironworks's gained card with a Silver

, the Ironworks produces no bonus because in the end it failed to gain a card at all. Ironworks provides a bonus contingent on it actually gaining a card, not merely selecting a card to be gained. This had implications on Ironworks's interaction with Possession

as well, since the Possessed player is not the one gaining cards. Since the 2020 revision to Trader

, Trader no longer prevents you from gaining a card, and so Possession is the only card currently affected by the rule.

According to Donald X., the Faithful Hound

kingdom card was inspired by "the idea of having a blue dog in Dominion".