Bridge Troll is an Action-Attack-Duration card from Adventures. It provides cost reduction payload while also effectively raising costs for your opponents by making them take their –

token; it is also a source of +Buy.

Bridge Troll got errata in 2022 so that its cost-reduction isn't a while-in-play effect.

As a terminal payload card, Bridge Troll offers a powerful combination of cost reduction and +Buy. Like Bridge

, this means that Bridge Troll payload scales quadratically, and can enable a megaturn with enough copies and support—with seven or eight copies of Bridge Troll in play (which can be played over two turns), you can buy all eight Provinces

Given the potential payoff for playing many copies of Bridge Troll, you’ll often want to build towards the following goals:

In practice, because you will usually lack enough copies of Bridge Troll to buy all eight Provinces

at once and the process of building will significantly lower piles, you will often want to watch out for a potential pileout. With the Buys and cost reduction from multiple Bridge Trolls, you can often empty one of the cheaper Victory card piles together with two other piles.

Timing your Bridge Troll gains can be somewhat complex. Often, it will not be the first

) are more useful at that point. Adding your first Bridge Troll shortly thereafter, however, can be useful if the extra Buys and cost reduction let you add extra engine pieces quickly. Once you have at least one Bridge Troll, it’s generally most efficient to ramp up by buying more Bridge Trolls on the same turn that you play the copies you already have: this ensures you use a relatively consistent amount of terminal space, and can build efficiently.

Bridge Troll also has an attack that impedes your opponents’

generation. This is generally neither very strong nor a reason in itself to pursue the use of Bridge Trolls, as its effectiveness is somewhat counteracted by Bridge Troll's own cost reduction effect, but it can occasionally make your opponent miss key price points in the early game. Given that Bridge Troll only offers payload in the form of cost reduction and simultaneously has an attack that reduces

generation, it does generally make it more difficult to buy anything that cost reduction doesn’t apply to—this includes Events, Projects, and cards costing

As a source of cost reduction, Bridge Troll can allow Workshop variants to gain more powerful cards, and anti-synergizes with some trash-for-benefit effects such as Apprentice

of their fodder). Additionally, the fact that its cost reduction is applied at the start of your turn can allow you to make use of it in scenarios where this isn't typically possible, e.g. to play stronger cards via Captain 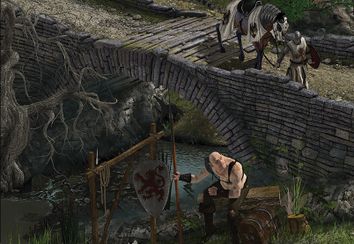 Bridge Troll was the only Attack before the release of Empires that did not fit into one of the four main categories of Attack cards (handsize attacks, junking attacks, trashing attacks, and deck order attacks).

Seaside had an attack that made cards cost

more on other players' turns. It died because it would have been the only duration card to go away other than at the end of your own turn. I figured out a fix for it and used it on Lighthouse

but the cost increaser had already turned into Cutpurse

. It was getting to be a mess and was still scary. Finally it just cost everyone else

via the token, turning into Cutpurse again. Only, it's the Cutpurse that never misses. Increasing costs had a certain charm but man the world does not need to be subjected to it. The upside of the card meanwhile had various forms before settling on Bridge

. It's two turns of Bridge, but instead of getting +

, you make the others lose

. It worked with Thrones originally but it was too much. Kent Bunn insisted this card be called Bridge Troll (it was Highwayman). When I put in the Adventures theme, okay, Bridge Troll it was.
—Donald X. Vaccarino, The Secret History of Dominion: Adventures

The attack certainly hurts; you are not looking forward to it when Bridge Trolls are around. It's a Cutpurse

The Bridge part is great for lining up multiple Bridge

effects. I don't think you see the really big Bridge

turn as often, but you get multiples at once more often.