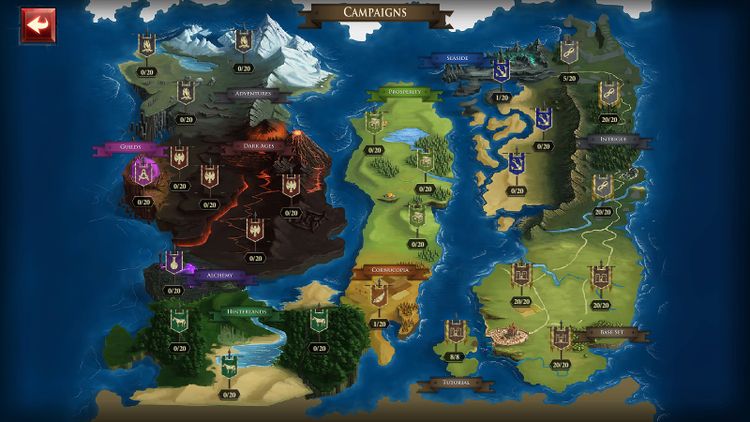 Partially completed overmap for the Campaigns.

Dominion Campaigns were a series of single-player games on Dominion Online by Making Fun with pre-determined kingdoms serving to introduce players to the cards of the relevant expansion. These Campaigns are considered a variant, rather than standard Dominion, due to the fact that the starting hands are often modified and the player can use "Favors" to grant themselves additional turns at the start of the game.

Campaigns have not yet been included on the current iteration of Dominion Online, though there are plans to include them.

The Base Set and each normal-sized expansion has three Campaigns associated with it - an Act 1, an Act 2, and an Act 3. Dark Ages has an extra Act 4, due to its large number of cards, and Alchemy, Cornucopia, and Guilds each only have one Act. The Base Set's Acts are automatically available, and all Acts from expansions are unlocked when their set is purchased in the Store.

Each individual Campaign (except for the Tutorial) comprises 20 games, where every fourth game is a Boss battle, usually against multiple players. Each game is preceded by a short text telling part of the story arc of the overall Act. The cards used to make kingdoms for a Campaign are mostly drawn only from the Base set and the relevant expansion; as the Act progresses, cards from other expansions are peppered throughout games.

After the first Act of each Campaign, rules variants begin to appear, at first just in Boss Games, while the final Act of each Campaign has a unique rule applied to all its games. For example, Act 3 for the Base Set plays as if the player starts with a Princed

, doubling the first Action they play every turn.

The order of the Campaigns is slightly different from release order - Alchemy is placed between Hinterlands and Dark Ages, even though it was released after Seaside.

When Dominion Online was first released under Goko, it came with "Adventures" for the Base Set, Intrigue, Seaside, and Prosperity, and Dark Ages soon followed after its release to the platform. At the time, the main map for the "Adventures" was half blank, leading to (correct) speculation that Alchemy, Cornucopia and Hinterlands would also be receiving "Adventures" of their own, even though these expansions had not yet been released to the multiplayer version of the platform. Each set was given 2 Acts (3, for Dark Ages) and a Finale, with the first Acts using only a part of the cards from the set, as Goko released expansions in half-sets. Eventually, the remaining expansions were released to the platform, and after longer still, received "Adventures". While Guilds was released while Goko still managed Dominion Online, the set did not receive an "Adventure" under their tenure.

Perhaps the most criticized part of Goko's "Adventures" was the use of "Zaps" - an in-game currency that could be bought with real money or other in-game currency, that was used to alter the starting hands of players and their AI opponents. The later Acts of each set were so difficult, due to AI opponents starting with Silvers

and sometimes even Provinces

, that using Zaps was almost necessary to finish off Act 2's and Finales.

When Making Fun took over and released their new Unity-based version of Dominion Online, they also decided to redo the "Adventures", retitling them "Campaigns", mostly given the new expansion, Adventures. For the most part, the kingdoms, AI opponents, flavor text, and art assets were ported directly over from Goko's version, but the Finales were completely redone, given new flavor text, retitled as simply "Act 3" for the relevant set ("Act 4" for Dark Ages), and given a rules variant to make gameplay more interesting. Zaps were removed completely, replaced with a limited amount of "Favors" allowing the player to take a couple extra turns at the start of the game. In addition, new art assets were added in the form of new maps, both for the main Campaigns screen, as well as for the individual Acts. Each game was also revisited, changing up starting hands for both players and their AI opponents (usually reflective of flavor text), and adding in select cards from other expansions to make the Campaigns more interesting.