Contract is a Treasure-Duration-Liaison card from Allies. If you have an Action card left in your hand during your Buy phase, Contract allows you to set the Action aside for next turn and play it then.

It is the first card to be both a Treasure and a Duration. 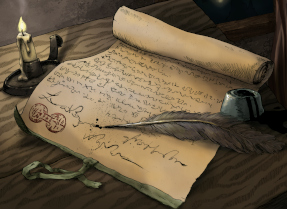 Contract was the first official Duration-Treasure (excepting interactions with Capitalism

Originally you could play an Action from your hand. Saving it for next turn was more interesting, and something I could do with a Treasure-Duration. A Treasure-Duration! At one point the set had five of them.
—Donald X. Vaccarino, The Secret History of the Dominion: Allies