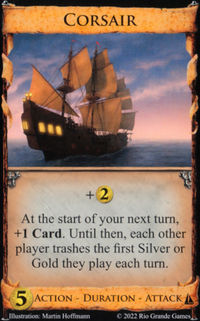 is an Action-Duration-Attack card from the second edition of Seaside. It is a trashing attack that targets Silver

that your opponent plays on their upcoming turn. 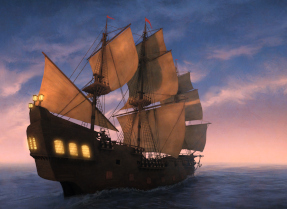 for years has been one of the very weakest cards in the game. At the same time it terrifies casual multiplayer groups, where everyone buys it and so someone who bought it wins. It also requires tokens for again just a single card in the expansion.

I felt like some people would be sad to have no piratey shippy thing, so there's Corsair. It attacks Treasures in a way that doesn't help your opponents.
—Donald X. Vaccarino, Seaside 2E Preview 3

had to go, but the set sure wanted some kind of pirate ship. It seemed like it had to trash Treasures, so it does. It tries a different approach than usual, hitting them in play. At first it could hit any non-Coppers

, but well, what about Duration Treasures? The simplest thing here was just to hit Silver