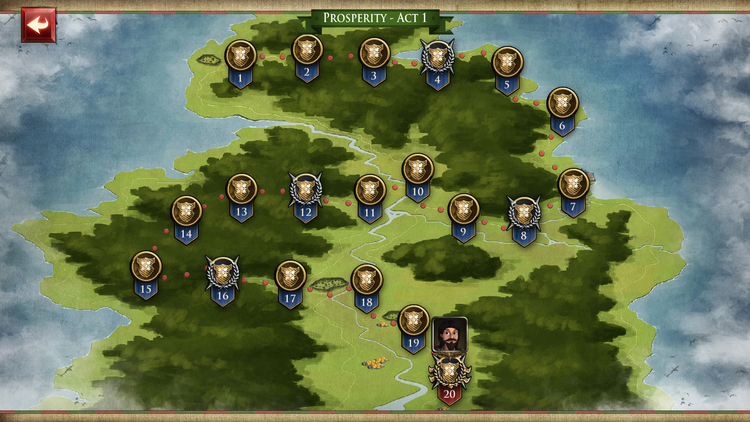 Dominion Campaigns: Prosperity Act 1 (originally subtitled Bigger and Better) is the first Act of the Prosperity Campaign on Dominion Online. It comes with the purchase of Prosperity.

Vaccara's wealth is endangered when a mass robbery takes place in an underground vault.

Your kingdom has become prosperous, and you'd like to expand and redecorate your castle. Hugh, your chamberlain, suggests a monument on the bailey; you think a 10-foot statue of yourself would be nice.

Since the peasants in the worker's village are making quick work of the construction, Hugh suggests that you build a vault in the nearby stone hills to hold your larger riches. After all, thieves can be found everywhere.

Your peasants have proven to be a surprisingly capable bunch. Every forge has blazed with beautifully-crafted swords and shields; the best are put in your vault. You think that establishing a trade route with other kingdoms would show off their work.

Alarm! A horrible gas attack at the vault has knocked out your guards, and the vault has been robbed! It looks like an inside job, but you and Hugh have the only two keys! Has he betrayed you? Has he been forging a plot against you?

You learn that Hugh is in a nearby city. There's a rural route that passes the mines and leads from that city to some distant lands. Could it be that Hugh is planning to take it? Better to capture him before he moves on.

You find Hugh meeting with the bishop, who is angry about your intrusion. Both deny Hugh's involvement with the vault's theft; you truly want to believe your friend is innocent, so you order your militia to wait.

Hugh gives you proof that he was in the chapel during the theft; it must've been someone else. Suddenly, everyone who was working in the market is hidden, and you are surrounded by a gang of angry goons.

The leader of the goons demands a large ransom for your release, and when you refuse, a fight begins. Hugh's bravery against the goons convinces you of his innocence. It seems that he and the bishop were telling the truth. If they manage to get you out of the city alive, it might be they who would have a monument raised in their name.

Hugh and your guards beat back the goons, but their leader escapes. The fight damaged the chapel; funds for the reconstruction can be arranged at the bank. You, Hugh, and your men head back to your castle.

Your route back to the castle takes you through a neighboring kingdom's grand market. Your men have done well; a few hours visiting the merchants at the market is a nice diversion.

A peddler at the market offers you a sword--one that was stolen from your vault! He resists arrest and runs toward the castle. You go to the castle to meet with the ruler at the king's court.

The king offers to discuss the matter over dinner at his castle. As you turn toward the dining hall, you see the runaway merchant, but now he's wearing royal garments...

Your men capture the "merchant," who turns out to be the king's son! A search of the prince's quarters uncovers the sword and other things from your vault. The king tells you that his son has his own estate nearby, and that you should search it as well.

You learn that the thrill-seeking prince and his friend often stole goods and sold them at the market, but they weren't in your kingdom during your vault's robbery. The king offers some of his guards as escorts for your group.

A search of the prince's estate turns up more stolen artifacts. The servants are hesitant to divulge any information; one of them finally speaks. "You said there's a reward, right? I did see a fine lady meeting with the prince; I see her carriage over yonder, heading here now."

You recognize the lady as Edith, one of the Artisan blacksmiths who had created swords and shields at your castle. She recognizes you, grabs a horse, and flees across the fields.

Curses! Edith escapes, but leaves behind in her carriage a chest of keys: her talents include crafting keys for others' locks.

Bad news from the king: the prince has also escaped. You hear word that the prince and Edith were spotted at an inn not far away. It's a mad rush to capture them before they slip away forever into the countryside.

You, Hugh, and your soldiers capture Edith and the prince, along with the small fortune they had amassed. Edith also has one last key: it looks like the one to your bedroom!

Edith's talent is too dangerous; she must be apprehended. If she could get inside your vault, what else might she breach?

Edith and the prince are under "castle arrest" at the palace, and the king assures you that neither one will give [player name] any more trouble. But with Edith's lock-picking skills, they might not stay away forever.