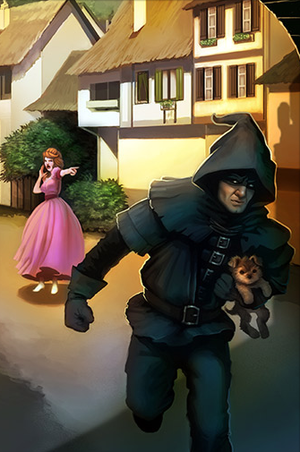 Dominion Adventures: Prosperity Finale, subtitled A Tiny Affair, is the final section of the Prosperity Adventures on Goko. It's available for a purchase of Coins, but cannot be played until Act 1 and Act 2 are completed. The cards available include the entire Prosperity expansion, as well as the Base set.

Your pet dog Tiny has been kidnapped and it's time for an animal rescue mission.

As the Prosperity Adventure wraps up, someone is threatening your second great love. Who could have masterminded the evil plot?

With King Leonard's aggression put down, your kingdom is returning to normal. Your people are happy, and you have the largest castle around. Life is perfect! Why does that worry you?

Things aren't perfect for Tiny, your itty-bitty pet dog. Tiny seems ill; he's not eating, and it's breaking your heart to see him sick.

A healer of animals you met at the grand market says he can cure Tiny's ailment. You agree to let him observe Tiny overnight, but you insist on taking a room next to his at the inn.

A scream--Tiny's pitiful yelps--sounds of someone running down the street. Through your window, you see a hooded figure disappear around the corner with Tiny in hand. You give chase, but it's hard to run in your nightgown...

Tiny's fierce bites caused the dognapper to drop him and flee. The excitement seems to have invigorated Tiny, and you're relieved he's feeling better. Is the healer complicit in the crime? You take Tiny back to the castle.

The animal healer is as confused as you are, and has no information about the attempted dognapping. As Tiny recuperates at the castle, you send your spies out to find who's behind the crime.

Your informants return with information--your old "friend" Galore is the villain! Even in exile, he manages to stay involved in your kingdom's affairs.

[edit] Boss Game 8 vs. Galore, the Mountebank and Squire Steven

Galore has set up his headquarters outside your borders; this mountebank's trail of broken dreams and empty wallets leads you to an old estate.

With Galore under guard, you plan on making his new "estate" one of your dungeon's cells. He still has confederates; you receive an anonymous offer for his freedom.

You're insulted by this offer; an honest ruler can't be bought! Anyone endangering the ruler's pet should expect punishment. You spend the night at a wayside inn.

You know he's in good hands at the castle, but you miss Tiny! Now the request for Galore's release has become a threat. This anonymous cohort greatly underestimates your resolve.

During breakfast at the inn, a group of locals begins a brawl with your soldiers. One ruffian lands on your table; you join in the melee.

It felt good to give someone a bloody nose, even though you got a black eye and fat lip in the process. The locals had been paid to start the fight! Galore's guards are found unconscious, slumped on the floor.

Galore is gone, and his trail is cold. Could it be the Baroness Paulina, perhaps? She and Galore were exiled together after their counterfeiting caper.

You locate Baroness Paulina, now running a school for young orphans. Her ill-gotten gain supports that school, plus a colony of artists. "No, I don't know where Galore might be," she says. "We've parted ways, and I much prefer this arrangement."

As you leave the Baroness's campus, your party is attacked; before you can respond, two of your guards are dead. Once again, you are face to face with the famous assassin Joseph Gelu. It's time for your self-defense lessons to prove themselves.

Your father's gift of lessons was not in vain. One final blow, and you knock Joseph Gelu unconscious. Your parents weren't prepared for their assassin; you refuse to meet the same fate.

Joseph Gelu has in his pocket a message from Warlord Hogan IV, another nefarious name from your past. Apparently, Hogan was the one responsible for Tiny's attempted dognapping, and he has plans to try again. You send word to your castle to double Tiny's guards.

Nothing short of a military offensive will stop Warlord Hogan IV in his greed to own Tiny. If war comes, so be it.

You and your forces confront Hogan IV at his castle. You find hundreds of terrified tiny dogs, all stolen from their loving owners. Hogan and his petite canine lust must be stopped.

Oh, the thrill of seeing hundreds of happily wagging tails. [player name]'s face has never been so thoroughly licked. Your joy is complete, though, when you cradle your beloved Tiny in your arms at last.