From DominionStrategy Wiki
(Redirected from Forts)
Jump to: navigation, search

Fort is a type of Kingdom card from the Allies expansion. There are 4 copies each of 4 differently-named Forts with a single randomizer card, forming a split pile: when Forts are selected as a Kingdom card for a game, they are put into a single Supply pile in order by increasing cost, of which only the top card can be gained at any given time. The cheapest of the four allows you to "rotate" the pile—move all copies of the current top card to the bottom of the pile, revealing the next card in the sequence. 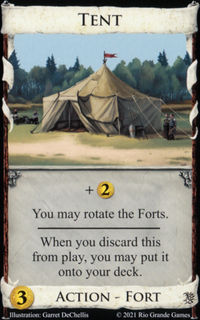 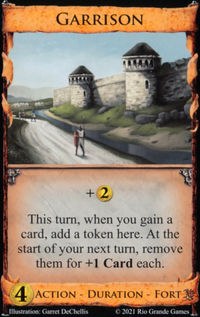 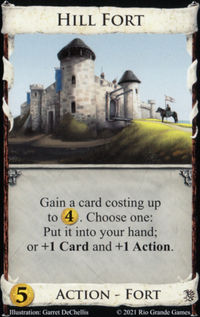 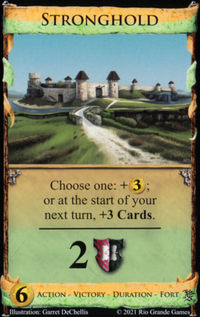 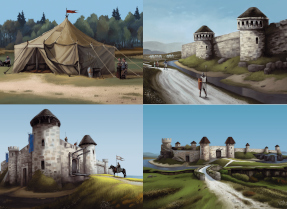 Tent started as its own pile. Actually it goes back to Hinterlands 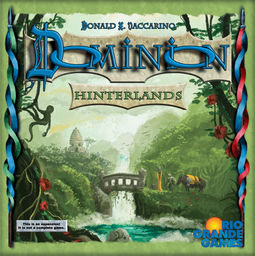 , where it seemed strong. With the wisdom of my years I felt like probably it wasn't really. Then it went into a split pile because well you sure don't need ten of these. Before Garrison, versions of Royal Galley 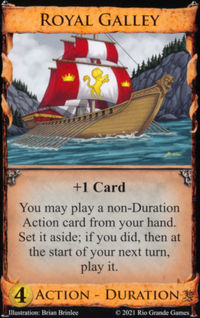 were here, plus a reaction you could play when an Action gave you +

or more. Garrison started out as its own pile, making +

next turn instead of +Cards, and after a while left due to having too many +Buy cards. It tried again as a treasure and then here it is. It removes the tokens so that it doesn't multiply if you have two of them. The third slot tried a few Remodel

s before getting to Hill Fort. The first version of Hill Fort gave +3 Cards at end of turn when trashed; a fine ability for something, but not too relevant here. And there was a Moat

, because, aren't Forts things that keep attacks out? But the pile didn't have an attack. Stronghold started out dividing tokens between this turn and next, with them giving +

this turn and +Cards next turn. You did not tend to finagle this so much, and it was way simpler to just offer up +

this turn or +3 Cards next turn. This one also tried giving +Cards at end of turn when gained/trashed, before just getting 2

on some of the bottom cards for the split piles, since sometimes you don't see them for a while.
—Donald X. Vaccarino, The Secret History of the Dominion: Allies