Hideout is an Action card from Renaissance. It is a village that trashes a card from your hand, but curses you if you trash a Victory card. For this reason, it does not excel at trashing your starting Estates

Conversely, if you do trash your Estates, you can use the curses gained as more fodder for the Hideout. Thus giving you at least 13 cards (7 coppers, 3 estates and 3 curses) you can trash. Just make sure to trash the curses before the game ends. 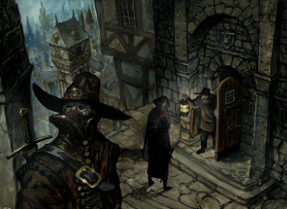 One of the first cards in the set, and it never changed.
—Donald X. Vaccarino, The Secret History of Dominion: Renaissance

] was part of the premise, a cool idea for a card. "Takes two plays to trash Estate

," it's some new card, like I was trying to make. Then it worked out, you sometimes consider whether it's better to trash Copper