Importer is an Action-Duration-Liaison card from Allies. It is a gainer that can gain

cards, but delays when you get them. It also changes the setup for Favors/Liaisons so that players start with a total of 5 Favors, rather than 1.

• At the start of the game, each player gets five Favors instead of one. Importer doesn't provide a way to get any more Favors during the game. 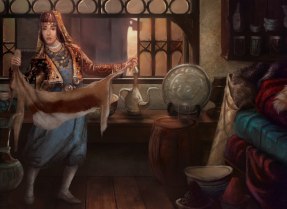 Importer means, you start with 5 Favors, but can't get any more (unless there's another Liaison in the game, obv.). And it gains

This started in the Odyssey 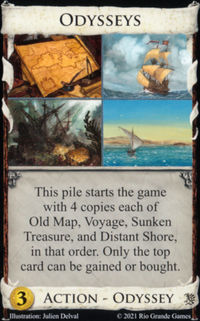 pile. It could gain an Odyssey card (crazy), or next turn gain a

, or discard a Silver

. I cut the Silver part and the crazy part, and messed around with it, then wanted it as its own pile. Matt suggested the setup, which is of course the focus of the card now. Initially that version had a cantrip option on top, then a "+1 Action +1 Favor" option. You only picked it when you couldn't otherwise play the Importer, and it's so much cleaner to not have the extra option.
—Donald X. Vaccarino, The Secret History of the Dominion: Allies