From DominionStrategy Wiki
(Redirected from Jack)
Jump to: navigation, search

Jack of All Trades is an Action card from Hinterlands. It has a collection of seemingly unrelated small effects: It is a trasher, a Silver gainer, a deck inspector, and a source of draw-to-X.

Donald X. Vaccarino has described Jack as an "after-the-fact Moat

", as its various abilities allow it to mitigate many types of Attack.

Jack of All Trades is a multifaceted card with many uses. Probably the most common is getting Jack in the opening to both jumpstart your economy and trash your starting Estates

. Whether Jack remains useful in the mid- or late-game depends on the Kingdom. In money strategies, you may play Jack throughout the game and even get more than one, flooding your deck with Silver

. In many engines, however, you will need to be careful to avoid stuffing your deck with too many stop cards, and may either skip Jack entirely or avoid playing it in the midgame until you achieve deck control (at which point Jack becomes an easy way to increase your payload).

Jack also functions as a defense against Attacks, countering junking attacks, handsize attacks, and top-deck attacks with various degrees of effectiveness. The Silvers

also defend against many trashing attacks (which may trash Silver

instead of a better card). For this reason, money strategies featuring Jack are very robust against many opposing decks, provided the Attacks can't be stacked too effectively.

Jack can occasionally be used to enable a draw-to-X engine in the absence of other draw. The challenge with this strategy is that you need to be able to reliably reduce your hand size below 5 so that Jack will draw, but you’re constantly adding Silver

to your deck, which may be hard to get out of your hand. Typically, this means you need a trash-for-benefit card such as Upgrade

so that you can constantly turn your Silvers

into cantrips or villages while also reducing your hand size.

, and b) have no use for the Silver

(i.e. trash-for-benefit or +Buy). Jack’s trashing is not thinning as you always gain a Silver

, replacing whatever card you trash, so engines with Jack will need to use other cards to improve their deck control. 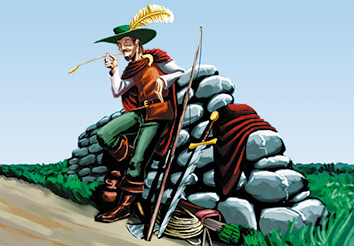 He does four things, but none exceptionally.
—Donald X. Vaccarino, The Secret History of the Hinterlands Cards