Lich is an Action-Wizard card from Allies. It provides huge non-terminal draw, but at a steep price: every Lich you play makes you lose one of your future turns. If you get sick of having that in your deck, too bad—it also can't be permanently trashed! 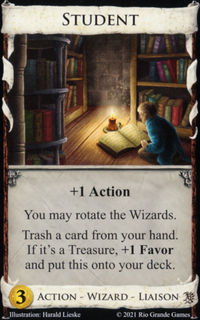 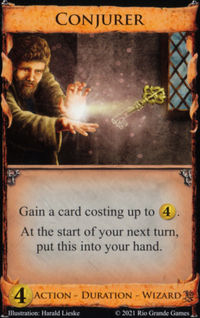 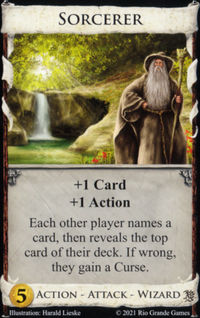 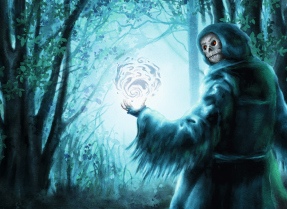 And Lich comes back when you try to trash it, like a Fortress

only not to your hand. Also Lich can uh skip your turn? Well maybe you aren't getting another turn anyway.
—Donald X. Vaccarino, Allies Preview 4: Recursion

Lich started out as a way to get all these upgrading split pile cards. It was played to gain cards from the trash, then that moved to a when-trash ability, and the top got "draw your deck, skip your next turn." Would you believe, that was overpowered. But someone has to try these things, and it might as well be me. The bottom was also broken, it put Lich into your hand when trashed and you could go nuts with various trash-for-benefit cards. The scaled back beast still looks scary.
—Donald X. Vaccarino, The Secret History of Dominion: Allies

For me, "here is inspiration for a card" absolutely does not carry with it "copy the inspiration as much as possible." "Reverse Tactician

" has zero obligation to have +Buy. I wouldn't necessarily even start with +Buy and then work from there. I'd start wherever. Lich's inspiration was "be a Lich." This does happen to line it up with reverse Tactician

There were Duration card versions, and I don't mean with some other ability, just for the "skip a turn." My best guess without digging through old posts is that it changed simply due to, if it's a Duration, when do you discard it, and how well do people do at not having to ask and getting that right. If it's not a Duration card, you just discard it the turn you played it, only Duration cards give you any thinking to do there.
—Donald X. Vaccarino, Interview with Donald X.

"Skip a turn" means exactly what everyone will know it means despite having fun questions, and there's a rulebook. "Skip your next turn, but this is cumulative somehow okay" was not as good of a wording.

As always cards try to avoid making players look in the rulebook, which they tend to absolutely never want to do.

Many people were consulted on the card wordings, in addition to how fun and balanced they were; this is the result. If I'd had better wordings for any cards they'd have them; if any card didn't seem worth the wording it would get, it didn't make it out.