Merchant Guild is an Action card from Guilds. It gives an extra Buy, and puts tokens in your Coffers for every card gained during your Buy phase.

With the new rules to Coffers introduced in 2021, you would be able to spend Coffers that you gained from Merchant Guild during the same Buy phase. Because of this, Merchant Guild received errata to give Coffers at the end of your Buy phase. It also lost the dividing line.

Merchant Guild is a terminal payload card and source of +Buy that functions well in a somewhat restricted set of circumstances. In the best case, you can use multiple copies to generate large amounts of Coffers, which sometimes even enables a megaturn. However, Merchant Guild has three main weaknesses:

Even in Kingdoms with better payload or without proper support, Merchant Guild can still occasionally be usable as an expensive source of +Buy, or with synergies that allow you to gain many Coffers with relatively few copies.

In theory, a Merchant Guild megaturn relies on two stages. In the first, you play multiple Merchant Guilds and use all of your Buys. Because each Buy that you use nets you as many Coffers as the number of Merchant Guilds you've played, and each one also provides an additional Buy to use, this scales quadratically, generating a large amount of Coffers. In the second stage, on your next turn, you use all of those Coffers to buy as many Provinces

as possible, with your Merchant Guilds providing the Buys to do so. Realistically, however, building up to the point where you can store up enough Coffers to green in a single turn is slow, and you will often be better served by greening over two or three turns, using the Coffers from each to bolster the next. The number of Merchant Guilds you need for this will depend on how reliably you can play them and how many Coffers you are able to carry over, but generally three or four copies will suffice.

While building your deck, it is usually a good idea to utilize the fact that Merchant Guild rewards you for buying more cards. Most often, this simply means using as many of your Buys as you reasonably can. Ideally, you have enough

or Coffers available to use these Buys to build up your deck, possibly via useful cheap cards (e.g. Border Guard

) or more Merchant Guilds. Sometimes, however, you will not be able to do so, and may want to consider buying junk such as Copper

; doing so will harm your deck control and may cause you to dud, but it may also give you enough Coffers to, for example, end the game on your next turn. Buying junk is more likely to be a good option if your deck is highly reliable or if you can trash the junk quickly: Watchtower

is particularly notable, as it can prevent the junk from ever entering your deck. 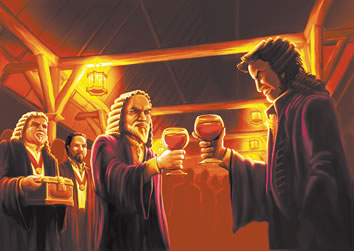 This started out thinking it could cost

The fix to Merchant Guild preserves its existing functionality, as well as possible. The intention of the Coffers change was not to make cards turn into different cards; Merchant Guild would still like to be Merchant Guild.
—Donald X. Vaccarino, Coffers Rules Change

I changed the rules for Coffers, so that you can spend them whenever. This is way better. It had two casualties: Patron

and Merchant Guild. So I changed both cards. While I was changing Merchant Guild, I switched it to when-gain, since I was changing it anyway, and this is what I would be printing today. Casual players often don't distinguish between gains and buys.
—Donald X. Vaccarino, Interview with Donald X.