is an Action card from Seaside. It saves up cards on a playmat and lets you pick them up all at once later.

Native Village is a cheap village that has a variable effect on your hand size: on average it decreases it, but by less than a true stop card would. While it can provide the necessary +Actions for an engine, most other villages come with stronger bonus effects, so the presence of such an alternative often makes Native Village skippable, although the low price means it can be a useful supplement to expensive villages offering superior benefits. While its storing effect can act as a way to remove cards from shuffles, this is usually an unreliable and temporary method of thinning.

The average impact on your hand size per Native Village played depends on the number of times you play it to put a card onto the mat before picking them up. For example, if you alternate between putting cards onto the mat and taking them off, Native Village effectively "draws" half a card per play; this ratio improves when you collect more cards on the mat and asymptotically tends towards that of a cantrip. Mathematically, this ratio is N over N+1, where N is the number of cards on the mat when you take them. For example, if you play five Native Villages each turn and pick up your cards only with the last one, this is equivalent to playing four Villages

. Systematically using Native Village in this way may not always be possible, however, since collecting many cards on the mat can present some problems. Since you don't have much control over which cards get set aside, the most common problem is that you can temporarily lose access to potentially important cards that find themselves on the mat, including copies of Native Village itself. Relatedly, another problem is that oftentimes you will need to pick up your cards from the mat prematurely (i.e., with a poor drawing ratio) in order to continue your turn.

In theory, Native Village’s stow-away-and-take-later effect is also useful for pseudo-thinning, being similar to an Exiling effect. This is however very difficult to practically implement, for multiple reasons. The primary problem of using Native Village for thinning is that you cannot usually control which card is affected. Exceptions such as topdecking or deck inspection effects of your own (like Secret Passage

) and of your opponent (e.g. Rabble 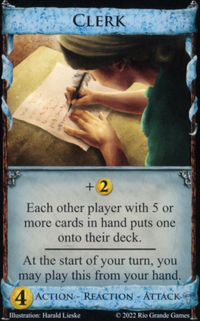 ) exist, but often requires a lot of effort to thin a single card, especially compared to traditional thinners such as Lookout

. Finally, the effect of storing a card or taking back all the stored cards is mandatory, so if you want to permanently store cards, you cannot play Native Village without removing another card from your deck, which may pose the risk of taking away important and useful cards, and is especially problematic when you also rely on Native Village for extra terminal space. Thus, this effect is a mediocre replacement for tools that let you achieve permanent deck control easily, and is instead more frequently useful as a way to temporarily remove cards from your shuffles. Most often, this can be used tactically if you have some knowledge over what you could stow away; for example, if you’ve been deck tracking you might be able to predict that the remainder of your shuffle is all junk, and therefore good targets for temporary thinning. This also makes Native Village’s effect useful in the early game when the chance of hitting a junk card is particularly high.

Deciding how and whether to play your Native Villages is usually a balancing act between its three roles as a village, draw, and thinning. Generally, playing your Native Villages later in your turn is better, as you’ll have more information (i.e., how much terminal space you’ll need, the remaining contents of your shuffles, the number of Native Village plays you can expect this turn, etc.) with which to make your decisions. For example, if your goal is simply to draw as many cards as possible, oftentimes the best approach is to use your other draw cards first before playing any Native Villages, then set aside with all your copies except for the last one. Another, less common example of balancing these roles is when you need the terminal space immediately (perhaps to play a terminal draw card) but risk setting aside an important card for a turn. In this situation, it might be a good idea to pick up zero cards from your mat.

One consequence of Native Village’s storage effect is that it can occasionally help you spike very large hand sizes. While in theory saving cards for a megaturn may be possible, in practice it’s difficult to achieve. Using Native Village in this way suffers from similar problems to using it for thinning: it’s very slow to set up, you cannot easily control what goes on the mat, and the problem of putting away useful cards is even more pronounced, as you are also voluntarily removing useful cards from your deck which reduces your deck’s abilities in the short term. Thus, while full megaturns with cards such as Bridge

(i.e., saving many cards on the mat then taking them all at once in order to stack their effects and buy many Provinces

) may take too long to be feasible, smaller scale setups (e.g., to trash many cards with Forge

at once) can be somewhat reasonable to pursue, effectively using Native Village in a manner similar to one-shot draw like Sinister Plot 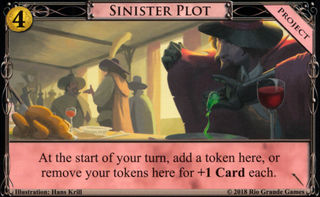 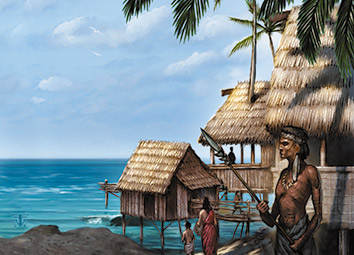 Originally this had you unable to look at the set aside cards. Celebrity guest playtester Richard Garfield at first misplayed this to let you look at the cards, then suggested, hey, why not change it so you can. We tried it both ways and well it was close. In the end I felt like serious players might actually prefer not being able to peek. However being able to peek made the card a little more powerful (so serious players would play it more), and, I felt, a little more attractive to casual players, who don't want to be counting cards so much. As you can see we went with peeking.
—Donald X. Vaccarino, The Secret History of the Seaside Cards