Silk Merchant is an Action card from Renaissance. It provides terminal draw and +Buy, as well Coffers and Villagers when it is gained or trashed.

While it may look quite unassuming, Silk Merchant is one of the best 4 cost openers in the game because of how easy it makes it to get to 5 coins on turns 3 and 4. Also, because it draws 2 cards, opening Silk Merchant and a non card draw card, like Silver, allows you to perfectly use your whole deck on turns 3 and 4 (unless Silk Merchant is bottom decked). While in some kingdoms you will prefer to open with a thinner like Remake

on a 4/3 start, on boards with popular 5 cost cards, Silk Merchant shines.

According to calculations by WanderingWinder, a player opening Silk Merchant/Silver has an over 50% chance to open with two 5 cost cards, and getting at least one 5 cost card is guaranteed on turns 3 and 4 because of the coffer. It also gives a player a decent chance to hit 7 for an early Inheritance

if that is in the kingdom. An even better opening is Silk Merchant/Improve 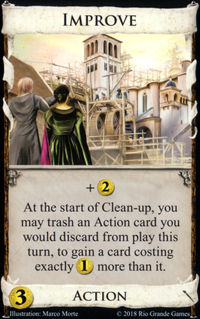 if the kingdom has desirable 5s, as the villager from Silk Merchant helps in the case of collision, and otherwise, the Improve can turn into another Silk Merchant or other 4 cost card, like one of the villages, to allow you to play your 5s, if terminal, more often. 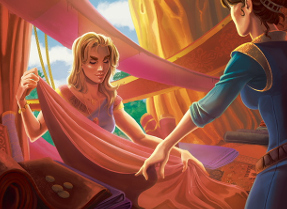 Silk Merchant spills out tokens both coming and going. You may even get use out of it in the middle.
—Donald X. Vaccarino, Renaissance Previews #3: Villain, Ducat, Silk Merchant

when gained/trashed, only with tokens in place of +

and +1 Action. I always like the idea of a when-gain that can draw cards, but it never survives, for the same reason: in the default situation, you don't want the cards. And then the triggered +1 Buy was problematic. So, no choice, it just gives you the other two.
—Donald X. Vaccarino, The Secret History of Dominion: Renaissance