Silk Road is a Victory card from Hinterlands. It is worth more depending on how many total Victory cards are in your deck.

It was removed from the second edition of Hinterlands.

Before it was removed, Silk Road was a weak source of alt-VP that was often skippable but occasionally useful as supplemental

in the endgame or as part of a rush. Silk Road's primary shortcoming is that its value in

ramps up very slowly, as you need to gain many Victory cards to make it worth more than a Duchy

but is more expensive; with eight, it is a valid intermediate between Estate

; with twelve, it has the

but is cheaper. Silk Road is therefore only worth gaining over one of the basic Victory cards if you expect to have eight or more Victory cards by the end of the game. This will not be the case for most decks, which would struggle with deck control, but is more likely to occur in some specific cases, which are occasionally enough to increase Silk Road's value beyond that of a supplement to your 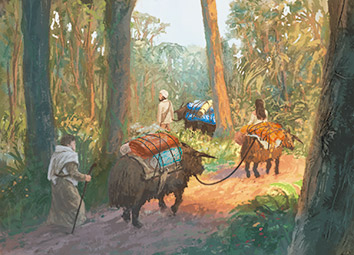 Land that's better if you have more land. That suggested a trade route. For a long time it was Orchard.
—Donald X. Vaccarino, The Secret History of the Hinterlands Cards

Silk Road was another borderline card. The experts were sure they didn't have to see it any more. I couldn't just replace it with another Victory card though - they take two extra cards, and the update pack just had room for one extra card. Hinterlands is no longer the set with 3 Treasures, 3 Victory cards, 3 Reactions; now it's, 2 Treasures, 2 Victory cards, 6 Reactions.
—Donald X. Vaccarino, Hinterlands 2E Preview 3