Skirmisher is an Action-Attack card from Allies. It is a source of cantrip money that does a Militia-esque handsize attack if you gain an Attack card during the turn you've played it. 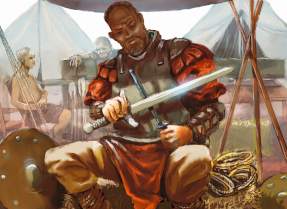 s people, but only when more attacks are coming in. Which of course can just be more Skirmishers, or some other attack.
—Donald X. Vaccarino, Allies Preview 1: Allies

Constant Skirmisher attacks could continually prevent your opponent from hitting

, which would prevent them from attacking you with their own Skirmisher.

It wasn't missed that [Skirmisher and Highwayman 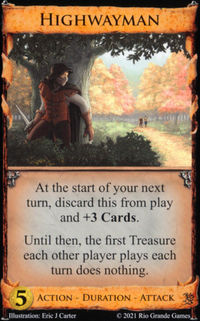 ] could do that; it didn't get me to make them suck. I'm okay with the worst card in each set being some attack that just didn't want to make the game suck. And that's mostly how it's going these days. But of course attacks like anything else are trying not to suck despite that; they just have a harder time getting to the sweet spot. Those attacks seemed good and still do; not game-breaking and not awful. Hooray!
—Donald X. Vaccarino, Interview with Donald X.