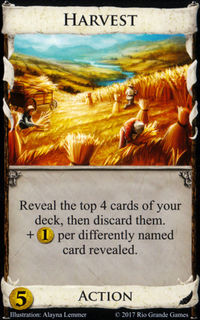 A terminal action is an Action card that does not give +Action when played. Terminals tend to have powerful effects, but only one can be played per turn without the use of villages. A central strategic principle, therefore, revolves around understanding how many terminals your deck can support and not overbuying them. The risk of collision—having more terminals in hand than can be played on a given turn—is serious, as it means that one of your hard-earned Action cards will not be played till the next reshuffle; but so is the risk of buying too few terminals if your strategy depends on playing them frequently.

Terminals can broadly be categorized into hard and soft types; if two hard terminals collide in your hand, you must choose between them, whereas a soft terminal can make use of the other terminal if necessary.

Terminals that draw cards into your hand, such as Smithy

, form an important category known as terminal draw. Caution must be exercised with such terminals, as they make it possible to draw Action cards dead—i.e., without enough actions to use them. This pitfall must be considered when optimizing the action-density of a deck with terminal draw.

when played, usually with an additional bonus; these are known as terminal silvers.

The large majority of Attack cards are terminal. Familiar

Without any +Draw, the chance of drawing your first two purchases together in hand 3 or 4 is about 30%. (Plus a 1.5% chance of your first shuffle putting both cards into Hand 5.) Terminal draw naturally raises this chance much further. A given terminal will show up in hand three without the other terminal 27% of the time, which lets us find that odds of collision when one terminal draws +1/2/3 cards are around 34%, 38%, and 44% respectively. (The actual chance depends on how drawing affects hand 5 and the shuffle: +2 cards means you'll see every card in hands 3/4, while +3 cards causes multiple cards to miss the reshuffle.)

This is generally too low to count on (e.g. for Throne Room, or a Baker-enabled pair of Treasure Maps, but high enough to significantly weaken such openings. 4/3 openings in particular have to be better than opening terminal/Silver and then buying the second terminal on that shuffle. With 5/2 the second terminal only has to be better than picking up nothing, but even that's far from a given.

The list of Opening does include a number of double-terminal openings, but without exception they consist of Chapel plus a strong 5. Beyond the obvious reason for this (Chapel is exceedingly strong in general), heavy trashing significantly changes the dynamics of a collision. First, by making a single missed play less painful - you'll see all of your purchases far more often. Second, by weakening hands 3/4 regardless of what you buy - drawing Chapel/Silver is often a dead card just like an action would be. Even with the strength of Chapel, only two of those suggestions pair it with terminal draw. Vault is a special case, letting you discard Chapel and your Estates for money if they collide. Witch/Chapel has no such special justification: Witch is simply too good to pass up, and the early damage to your opponent's deck reduces the harm of your wasted draw.

Opening with two terminals is clearly a viable strategy, then, and occasionally it's clearly the right choice. But either the effects or the sheer strength of the cards in question has to outweigh a roughly 1/3 chance of adding a dead card to your early deck.