Tormentor is an Action-Attack-Doom card from Nocturne. It's a terminal Silver that either gains you an Imp

, or Hexes other players.

, which are nearly as good as Laboratories

Tormentor’s main limitation is that its best effect will usually be difficult to activate. Because Tormentor is a terminal Action card, playing it first will usually cause you to run out of Actions, terminating your Action phase before you can play any additional Action cards. Tormentor is best gained early in the game (especially on turn 1 or turn 2) when your deck is unlikely to have many other Action cards in it so that Tormentor can be played for an Imp

without interfering with other cards you want to play.

Cards that give out Villagers synergize well with Tormentor. By banking up Villagers on prior turns, you can begin by playing Tormentor for an Imp

and then spend a Villager to continue on with the turn as normal. Similar effects can be achieved with Barracks 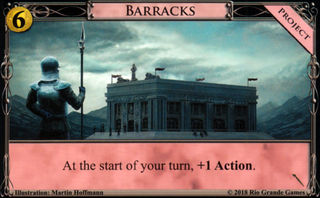 , Coin of the Realm 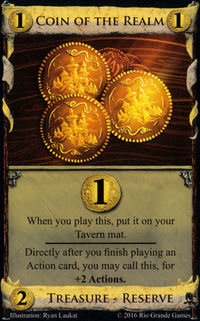 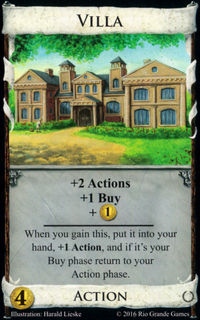 Tormentor interacts poorly with Duration cards. Even if you play Tormentor as the first card of the turn, it will still fail to gain an Imp

if you have Duration cards still in play from prior turns.

While Tormentor can also be used for attacking, its attack is not very strong for a

Action card, as Hexes are variable and not consistently damaging to your opponents. This can be somewhat mitigated by playing multiple Tormentors per turn, as you are more likely to find a Hex that significantly hurts your opponent. This can make Tormentor more attractive than most terminal silvers as payload in draw-to-x decks, or in Kingdoms with Capitalism 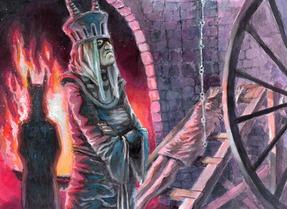 For strumphf's 2022 advent calendar, Donald X. went in-depth on the development of Tormentor.

When I made the Hexes, I made a card that just gave +

and handed out a Hex, to test them out. This card seemed fine, but space was tight, and did we really need both Bard 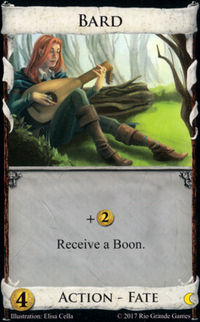 and it, and other Hex-giving cards quickly crowded it out. I briefly tried a version that tried to do the Tracker 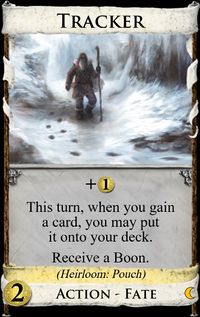 trick of being a combo with Hexes, but it wasn't much of a combo with them. Then later on I was considering, are there ways to get a little more use out of the Spirits, and made this, a card that only gives you an Imp if it's alone. It could have been first play or only card in play; the latter is simpler but is messed up by Duration cards. The Imp is good, it felt like not playing nice with Duration cards was okay. The "no other cards" mechanic had been on another card earlier with a less sexy bonus. And then one late change to the set was having Tormentor not Hex them if you got the Imp; previously you got both, yeeha. The idea behind the change was just to get the order of effects better on the card; you want to reach for the Imp right away, while the other players want to reach for the Hex. It can't delay the Imp, but if the Imp is first then it's more awkward to phrase if you get both. But you know, once you are getting an Imp, you are happy, you don't need to Hex people too. And they're happy not to get Hexed; it's win-win.
—Donald X. Vaccarino, The Secret History of Dominion: Nocturne

There was a card worth 2

if you had no cards in play other than copies of it. There were a few variations; it stopped being an anti-combo with Duration cards, it gave you a little something instead of nothing. Player interest varied but it was not a star and also ate up 2 extra cards due to being a Victory card. I needed the space, something had to go. The concept is vaguely preserved on Tormentor.

After I had Hexes I thought, can I make a card that combos with them. I made a village that had other players put gains/discards on their decks - it turned Witch

s. It didn't actually attack by itself though. It wasn't actually much of a combo with the hexes, and in regular games seemed to just so rarely mean anything.
—Donald X. Vaccarino, The Secret History of Dominion: Nocturne