Town Crier is an Action-Townsfolk card from Allies. It is part of a split pile that it shares with the other Townsfolk: Blacksmith 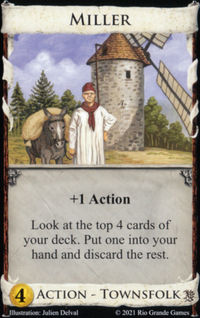 . It gives you a choice between using it as a terminal silver, a cantrip, or a Silver gainer, and allows you to rotate the Townsfolk pile. 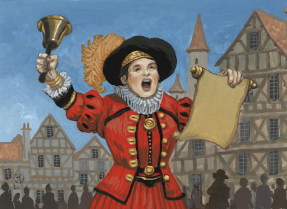 For a bit the pile had a Mafia theme - it was Vigilante, Miller, Town Doctor, Elder. The Vigilante trashed a Townsfolk from the supply, only they were called Townies. The first version though had a Town Crier, without the cantrip option and with "gain a Townie" instead.
—Donald X. Vaccarino, The Secret History of the Dominion: Allies