Trade Route is an Action card from Prosperity. It trashes a card and gives money proportional to how many different Victory cards have been gained. It is a weak source of thinning and +Buy and was removed from the second edition of Prosperity.

Before it was removed, Trade Route offered an additional Buy alongside both weak thinning in the early game and a weak payload effect later. As a terminal stop card that trashes only one card at a time and usually generates very little (if any)

, Trade Route is very slow to improve your deck, and the best case scenarios for each of its abilities are somewhat at odds with one another, making for a generally low-value card.

Trade Route is undesirable as a primary method of thinning, although it can occasionally be worthwhile if the payoff for getting rid of junk is very high (e.g., there’s an extremely strong draw-to-X engine available). However, Trade Route is weak enough that it’s usually not worth trashing in this manner; for example, you may be better off investing in very strong draw as a more effective way to achieve deck control. Trade Route can sometimes be useful as a supplementary thinner (e.g., alongside a more restricted but powerful thinner such as Counterfeit

), but it’s usually inefficient to spend resources to gain and play it to thin one or two Estates

On top of its thinning problems, Trade Route is also a weak option for terminal payload. Although +Buy is often a very powerful effect for building that can be enough to make an otherwise weak card worth gaining, Trade Route is not a source of net gains due to the mandatory trashing effect. Functionally, therefore, the +Buy is useful primarily while you still have junk to trash; in order to use it to gain multiple Victory cards later in the game, you’re likely to need other gainers to provide fodder for it to trash, which severely limits its power. However, this means that the +Buy is most likely to be usable at the stage of the game in which Trade Route generates little or (more likely) no

, since it is unlikely that players will be gaining Victory cards when there is still plenty of junk left in your deck, and therefore it is likely to be difficult to generate enough

from a hand with Trade Route to take advantage of the extra Buy. In the late stages of the game once players have started greening, Trade Route may generate a more usable amount of

, but by this point it is often too late for it to help much with thinning, and it is still likely that there are preferable payload cards as Trade Route is unlikely to be much better than a terminal silver. Rarely, in very sloggy games where you have both plenty of junk to trash and an extended Duchy dancing period, it’s possible that Trade Route’s trashing could be useful for getting rid of Curses

generation better than a Silver 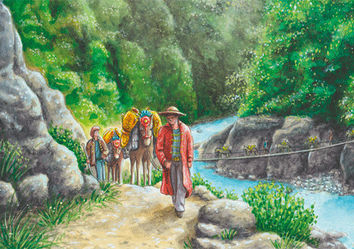 This started in the original 4th expansion, and migrated here in the great diaspora of interactive cards. The first version in the 4th expansion was "+1 Card +1 Buy +

. If anyone got a Province this game, +1 Card." I fixed that up to a less-well-worded version of the card you know when I moved it to Prosperity. Late in the going it got a wording that used tokens and mentioned setup.
—Donald X. Vaccarino, The Other Secret History of the Prosperity Cards

if you ask why say Trade Route doesn't cost

, the answer is, I didn't even consider it. It cost

and we bought it. I wanted to have no

's in Prosperity, but I never thought, "I would make Trade Route cost

but I don't want any

I guess this is testimony to the power of trashing even when it's bad? This is pretty bad, I mean uh. Normally you trash one card and get no +

. If it's the only trashing, sure, trashing is that good, but so often there is something else. Now some games people make it good for you, they can't help it, and man, okay, you get it then.
—Donald X. Vaccarino, $3 Cost Card Rankings Bottom Half