Altar is an Action card from Dark Ages. It is a trasher which can trash one card at a time, and a gainer which can gain you cards costing up to

- very nice when you can play it often to transform your junk into expensive actions!

Altar has been discussed on the forums by DG, RD, and others.

In a way, Altar plays a bit like an Expand

. Trash out bad cards for good ones. If you can trash out slow cards for fast cards, the Altar will be played more often and can refashion your deck. Cash in at the end by trashing for Victory cards, in this case for a Duchy

. So how does it differ?

An Altar can be put into quite a poor deck, perhaps one filled with Curses

, and immediately trash out rubbish for good cards. This is different from the stepwise improvement provided by a Remodel or Expand. Whilst a Remodel or Expand can trash mid-cost cards for something better, the altar should always trash out junk and should therefore avoid terminal collision.

. Gaining Duchies in the final turns is handy but not enough to justify buying the Altar and you simply might not be able to afford the Altar in the early game, so it needs to be played repeatedly in the mid game to make a difference. Thankfully

-cost engine cards often do pay off and can drive the repeated play of key cards like an Altar. This suggests that the Altar needs good action cards at cost 4/5 in the supply to drive an engine deck, and this is indeed one of the best uses for an Altar. Its most effective use is to gain your big

engine piece while spending your small amount of coins on the

piece until you can consistently draw your deck and play the Altar every turn. Then use it to keep gaining engine pieces while acquiring some source of money to start buying Victory cards. The beauty is that you just need to hit

once and then don't really need any money until you can consistently draw your whole deck.

So what helps get you an early

? Here are a few contenders.

On the flip side, Altar seems to be rather in competition with a card like Horse Traders

, which provides a legitimate alternate road to

. I can't think of many other cards that help you hit

) but I'm sure they exist. Obviously Altar also tends to compete with strategies that don't involve building a strong conventional early economy at all: Chapel

It is likely to perform worse in slow cycling, Treasure-based Big Money decks where you are probably better served by Gold

The Altar shares some of the same properties as other actions that gain cards up to a printed cost. It is improved with Bridge

. It can repeatedly gain the same card from the supply each time it is used. This allows it to create extreme decks heavily skewed towards a strategy and the Altar can certainly create extreme action engines - for example, Highway engines. Altar can gain Highways, and with only three Highways in play, Altar can gain Provinces. 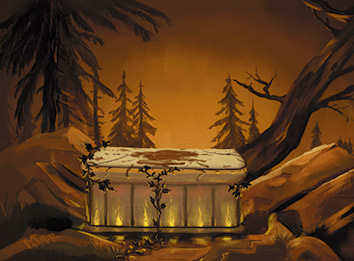 This is identical to the original version from 2007 except for name. Originally it was Foundry, then Tinker. I called it Altar so you could sacrifice Cultists to it. No, don't thank me; it's what I'm here for.
—Donald X. Vaccarino, The Secret History of the Dark Ages Cards