Apprentice is an Action card from Alchemy. It is a trash-for-benefit card that provides non-terminal draw based on the trashed card's cost. It is okay for trashing your starting Estates

, but poor for trashing Coppers

; it shines when used to strategically trash expensive cards like Gold

to get huge hands.

There is no strategy article for Apprentice.

. It is more similar to Remodel

in that it is a higher-cost card that benefits most from trashing high-value cards.

Apprentice is exceptionally poor for trashing copper and curses, as it gives no benefit. It is slightly better for trashing Estates, but the +2 Cards is more of a consolation, and not sufficient to make this card viable as an early-game accelerator. Very early in the game, Apprentice is usually best passed up in favor of stronger cards costing

The true benefit of Apprentice is only evident when it is used to trash high-value cards. If the average value of your deck is high, each card drawn can easily net you

or more, and with +Buy, trashing a high-value card like Gold

or more, quickly leading to a mega-turn if you get a good engine set up, or allowing you to speed through with double Province buys.

, or Horn of Plenty

that can gain Gold or high-cost cards, are also great sources of Apprentice fodder, but even cards like Ironworks

can give a substantial benefit.

Apprentice works best when the average value of your deck is high; otherwise, even if you draw one costly card you want to trash, the card draw from trashing a high-value card is unlikely to net you enough coin to buy back the card with enough extra coin to purchase a province or other key card. Even though Apprentice offers no benefit for trashing copper, the trashing of copper can be important to setting up an engine where Apprentice reaches its full potential. Apprentice thus benefits from early game trashers.

As a trasher, Apprentice looks superficially similar to Upgrade

: both are non-terminals costing

which draw cards. Which of the two cards is a better buy is situational: Apprentice is generally superior if there are no desirable targets for upgrading, but Upgrade can be superior when there are desirable

-cost cards, or in the absence of +Buy or gainers to fuel Apprentice later in the game; Upgrade is also superior for trashing copper and curses. 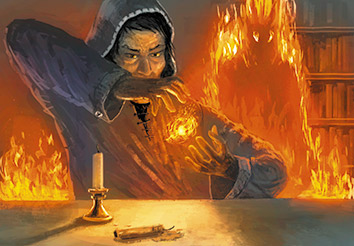 This started out in another set, without the potion part. It seemed like a good fit for this set, so I moved it here, first at

. At that cost it was slow to get going, and eventually I put it back at

. The potion part makes it seem less sad when you are playing an Alchemy-heavy game, and also answers the question "what does it do with potion costs" right on the card.
—Donald X. Vaccarino, The Secret History of the Alchemy Cards

Probably I would drop the

clause from Apprentice. It got that because 1) it meant every card in the set interacted in some way with potions

, and 2) it answers the question "what if I trash a card with

in the cost" right on the card. But really, whatever, the simpler version is better.
—Donald X. Vaccarino, What Donald X. Might Do With a Dominion Time Machine