Armory is an Action from Dark Ages. It is a gainer like Workshop

, with the additional gimmick that the card it gains goes straight on top of your deck!

There is no strategy article yet for Armory. Feel free to add your thoughts!

—though it is a little weaker for gaining the Victory cards themselves, since you ordinarily don't want those top-decked. Moreso than Ironworks or Workshop, Armory is stronger for constructing and working with engines.

However, its top-decking can be used in far more abusive ways. 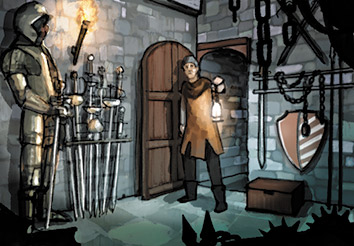 The lone survivor (here) from the failed small expansion with a top-of-your-deck theme. It's a straightforward card that never changed.
—Donald X. Vaccarino, The Secret History of the Dark Ages Cards