Artisan is an Action card from the second edition of the Base set. It is a powerful gainer: it can gain anything costing up to

and put it either on your deck, or into your hand if you top-deck a different card. It's terminal, though, so if you want to use those

Actions right away it'll take some setting up.

Artisan is a versatile gainer due to its topdecking ability.

Firstly Artisan can be used as a terminal action to gain and topdeck a poweful fiver for your next go. Secondly, with some village support you can gain and play an fiver on the same turn. Finally Artisan has some useful endgame functions such as gaining a duchy and topdecking a good card for next go or gaining a treasure to hand to help clutch the last province or colony. 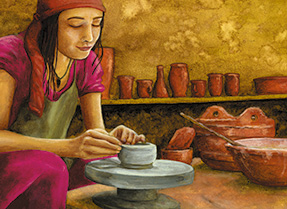 For a while this was, cost

, discard down to 2 cards in hand, gain a card costing up to

. The idea was that the ability was strong enough that it was worth jumping through hoops for. But in games without combos, it wasn't very good, and when you did have the combos, Library

and still wasn't impressed. Meanwhile I had had a card in Empires (gain a Gold

to your hand, put a card from your hand on your deck, each other player gets +1

) that hadn't worked out but had seemed promising, and I tried versions of it with different penalties. Finally one day I realized that costing

would be more fun than having a (second) penalty. Which means the set still has a card for