Bazaar is an Action card from Seaside. It is both a village (i.e., it gives +2 actions) and a Peddler variant (a cantrip producing +

), making it very reliable in many engines despite its relatively high cost.

You draw a card, get 2 more Actions to use, and get 1 more

to spend this turn.

There's no strategy article for Bazaar. It was mentioned in this article by chwhite, edited by theory.

engines, but it also gives +

so you don't have to invest in very many treasures, just enough to hit 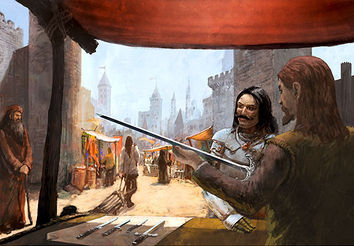 This art was turned in for Market

A vanilla card. It was in a later set, and I moved it here to have another Village. We accidentally got two illustrations for Market; this card has the one that isn't on Market.
—Donald X. Vaccarino, The Secret History of the Seaside Cards