Bridge is an Action card from Intrigue that reduces costs of all cards. It is similar to a terminal Silver if you only buy one card, but can be very powerful if you play many Bridges and make use of all of their Buys. It is one of the best enablers for mega-turn strategies, where you buy no Victory cards until you get one huge turn where you buy enough of them to win the game.

A single Bridge is a terminal Silver. Like most of the terminal Silvers (Swindler, Woodcutter, Chancellor) it gives you a little plus: you could think of it as a Silver with +Buy that gives you

more per buy. So it’s a little more flexible than a Silver if you want to pick up cheap junk, but otherwise not all that interesting.

The real power of Bridge, of course, is stacking them on top of each other. King's Court

, and 9 buys. It is guaranteed to be able to buy out 10 Provinces in a single turn (enough to empty the stack in 2p), and with a little help can even empty 10 Colonies. The key tipping point is when you have enough Bridges such that your target purchase costs

: now your purchasing power is suddenly no longer limited by your money, but by your +Buy.

As most people realize, it’s difficult to play a mega-stack of Bridges without +Actions. Chaining KC’s and TR’s will only get you so far. But the true hidden crux of the Bridge megaturn is +Cards. You can’t get enough Bridges in play unless you have some way of drawing them all. This is why a simple Village

/ Bridge doesn’t get you very far: with just five cards in hand, you can’t rely on drawing enough Bridges to do what you want. (Native Village

/Bridge being a somewhat odd exception, which has its own article and page on the wiki.)

In that sense Bridge is the archetypal “engine” card. If you’re playing mostly just money, then there is surely a superior terminal for your deck than Bridge. But with +Actions and +Cards, Bridge’s power accelerates with each Bridge added. Bridge shines with cards like Tactician

: the typical mega-turn cards. In other words, Bridge is only worthwhile if you can play 2, 3, 4, etc. of them on a single turn, looking to empty all the piles at once. On boards where you have no real way of doing this, you may as well look elsewhere.

, etc. In practice, this will not work. Don’t bother. Highway

is the card with which to do that; if anything, you’re more likely to shoot yourself in the foot with Bridge and trash-for-benefit cards like Bishop

(which suddenly gets a whole lot worse once you’ve played a lot of Bridges). You may as well just be playing an extra Bridge instead of going for these shenanigans.

In many ways Bridge is a lot like Goons

, and indeed the two work very well together. Buy phase synergy is a multiplicative product of three factors: +Buy, cost reduction, and buy duplication (with VP per buy being a special added factor for Goons). A single factor doesn’t do much: it doesn’t matter how cheap Peddler

is if you only have one Buy. The power of Goons and Bridge derives from the fact that they are both “buy multipliers”: they each provide explosive buy phase synergy because they add multiple factors to the equation. (This is incidentally why Highway will never be as good as Bridge: although it’s easier to stack, it is only giving you one of those four factors, and you need another one to make it worthwhile.) 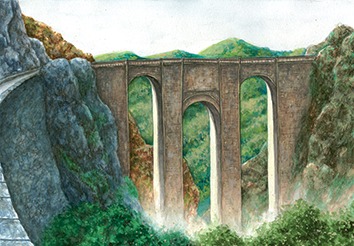 I tried something like this in the murky past for the main set, and decided it was too strong. I had a weaker version that I later tried on Woodcutter (it only made the 2nd copy of a card that you bought in the same turn cheaper), but decided that was too confusing for the main set. A while later I had just stolen a card from the 6th set for the main set, and needed a replacement. This idea sounded like it might not be trouble after all, and in fact it wasn't. I then stole this from that set for this one when I needed another +Buy card.

Bridge makes all cards cheaper, not just ones in the supply. This was to prevent problems in weird situations. I am not sure the kind of thing you'd need to get those problems will ever happen, but I knew that this way of doing it meant I was safe. This also allows some unusual combos to work.
—Donald X. Vaccarino, The Secret History of the Intrigue Cards

I would consider whether I like Bridge as is, in its Throne-able

glory, or if I would rather phrase them the way I think such stuff in general should be phrased, like Highway

etc.
—Donald X. Vaccarino, What Donald X. Might Do With a Dominion Time Machine