Butcher is an Action card from Guilds. It is a Remodel variant that puts money in your Coffers and allows you to spend from your Coffers to increase the cost of the card you gain with it. If you don't want to remodel a card, you can spend the Coffers tokens for +

or save them for later, as usual.

See here for a short article about Butcher 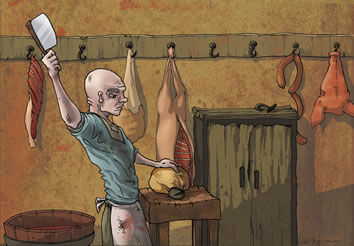 Butcher is the only card that allows you to remove tokens from your Coffers outside your Buy phase.

King Casimir only lived to be 60. Did he ever go bald? The wikipedia article doesn't say. If so though that would be in line with the 4th theme in Guilds: bald people. And one of those bald people is Butcher.

that you spend coin tokens to pump up. With enough coin tokens you can go straight from Curse

. You can also just trade a card in for something at the same cost or less, while keeping the two coin tokens for later. There are a lot of ways you can go.

Butcher gives you a special use for coin tokens. That's not a theme of the set, that's just Butcher. It provides some coin tokens itself, so it's not like you have to have another Guilds card with it to make it do its thing. It's all been taken care of.
—Donald X. Vaccarino, Guilds Previews

I wanted some other way to use coin tokens if I could get one. Butcher lets you spend them as part of a Remodel

. It also gives you coin tokens, so it won't be sad when there are no other coin tokens around. For a while I considered making a simpler version of this, but ended up going with the full-on tricky version. The wording is convuluted, and not even technically correct - it says "plus the number of coin tokens," which never confuses anyone, but it should convert the units - "plus

per coin token." It ended up with this phrasing because a phrasing that said "per coin token" got read by some people as gaining you a card per coin token spent, rather than adding them to the cost.
—Donald X. Vaccarino, The Secret History of the Guild Cards