Cache is a Treasure card from Hinterlands. It is worth

, like Gold, but comes with what is typically a drawback—gaining two Coppers

. It is most useful when you either don't mind the additional Copper, such as with Duke

, or you can deal with the Copper, such as with Trader

Originally posted by Insomniac on the forum

it comes with, but when is Cache good? There are some obvious good uses, such as with Gardens

, but there are other less obvious synergies as well.

per Card on average in a province game and 2.2

per Card - this makes it acceptable in Province

games but rather poor in a Colony

game. However, even in a Province game, you're still going to want Gold

to counteract those green cards you buy.

[edit] Implications in an Engine

In an engine, Cache is usually terrible; it adds 3 cards to your deck and only one of them is useful, and Copper

is normally terrible. There are exceptions, but they are often things like Counting House

, which conflict in cost with Cache and are generally sub par.

If, for whatever reason, you have no trouble drawing your whole deck but don't have enough money in it, Cache adds

worth of Treasure to your deck in one purchase. It's not bad, but are you really going to keep consistently drawing your whole deck despite those three cards for the rest of the game?

In games where there is a conflicting

card that you want is where there is going to be a bit more of a decision regarding cache.

buy, are ahead in Victory cards, and your deck's average card value is getting too low. This is more common in Alt-VP strategies, like Silk Roads 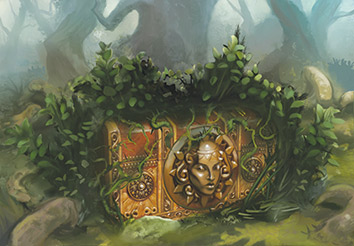 One of the oldest cards in the set, dating back to the 2006 version, and I never changed it.
—Donald X. Vaccarino, The Secret History of the Hinterlands Cards