is an Action-Duration card from Seaside. On the turn it is played, Caravan is just a cantrip, giving +1 Card/+1 Action; however, since it gives +1 Card at the start of the next turn, playing Caravan this turn is equivalent to playing a Laboratory

on the next turn!

See here for a strategy article about Caravan.

Caravan is one of the cheapest cards that can be used to reach large handsizes. It can be thought of as a next-turn Laboratory

. As a cantrip, it is readily spammable, allowing you to buy as many as possible. It is a card that benefits most decks and almost never hurts your deck. The fact that Caravan's draw is delayed by a turn makes it slightly weaker, but a larger downside is that, because it stays in play an additional turn, it is more likely than Laboratory to miss reshuffles. This can make it markedly weaker than Laboratory in certain situations.

Its low cost, however, makes it much easier to obtain, both by purchases, and through gaining cards. It is one of the more attractive cards to gain with Talisman

, and its presence on the board makes these gainers more valuable. 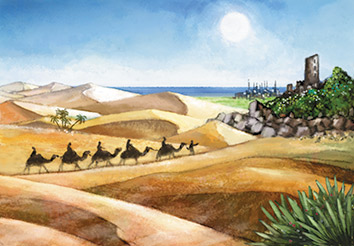 A card from pre-development but after Jay had picked up the game. For a long time you actually set a card aside when playing it, and then drew that card next turn. That way was a little more flavorful, but the published version is slightly simpler.
—Donald X. Vaccarino, The Secret History of the Seaside Cards