Chapel is a trasher from the Base set. It used to be regarded as the best card costing

in the game until 2019 (and the most powerful card relative to its cost) because of its ability to quickly improve deck quality, namely by trashing Estates

This is the best card in the game.

Simply put, no other card fundamentally alters the game as much as Chapel and its deceptively simple ability. Chapel allows cards which depend on each other to be drawn together without being interrupted by dross like Coppers, Estates, and Curses

, and this allows for a variety of turbo-charged engines.

In the base game, Chapel was so important that Dominion was essentially two different games: “games with Chapel” and “games without Chapel”. Later expansions have provided alternative trashing options, such that thin decks are no longer the exclusive hallmark of Chapel. Nevertheless, Chapel continues to be the most efficient and most readily available trashing card. Indeed, its presence seriously advantages players that begin with a

opening split, since players that start with

will readily forgo money to buy the Chapel on the

There are few situations where you shouldn’t purchase a Chapel on one of your first two turns. Generally speaking, if there are no Reaction cards, then over-Chapeling is dangerous against the Thief

(with support) and the Pirate Ship

, especially in multiplayer games. It is also dangerous when your opponent shows signs of pursuing Gardens

; a good Gardens player can end the game before a fine-tuned Chapel engine kicks into high gear. And Masqueraders

might be able to force you into uncomfortable positions. But even these situations do not call for forsaking Chapel per se, only judicious use of the Chapel.

Against Curse-giving attacks, it is even more crucial to Chapel as much as possible and as quickly as possible. (If Reaction cards are present, then Chapeling is the first line of defense because it ensures that you can consistently draw your Moats

.) It is completely untrue that Witch

is weakened when Chapel is available; in fact, probably the opposite is true. Being forced to trash Curses can slow you down just enough to fall insurmountably behind an opponent that is Witching and Chapeling at the same time. (This is less of a concern when Colonies

are in the game, since you’ll sometimes be able to catch up by the time the Colonies are contested.) You should never need to get a second Chapel; if you do, that’s probably evidence that you didn’t Chapel fast enough early on.

Once past the early game, Chapel usually lies dormant, called upon only infrequently to defend against the odd Curse or Copper. Goons

decks are an exception, since you might want to buy Coppers for the

tokens and then clear them out. A particularly unlucky Hoard

or two for Golds

, and the Chapel can come in handy here.

Chapel even works well with other trashing cards (like Remodel

) since those cards can turn late-game Chapels into something useful. (Loan

, of course, being exceptions.) Remodel is particularly effective in Chapeled decks because it is more likely to convert good cards into even better cards, instead of Coppers into 2-cost junk. Chapel does somewhat conflict with Forge

, however, since Forge’s best ability isn’t gaining Victory cards but clearing out a ton of deck junk at once.

When actually Chapeling, you should almost always Chapel as much as you can in the early game. (It is instructive that Donald X. noted that playtesters experimented with a Chapel that trashed only up to 3 cards, and “It was horrible. Just, way slower than the current version, like you wouldn’t believe.”) The more you delay, the more difficult it is to streamline your deck. If you draw the Chapel with 4 Coppers, you should have no hesitation about trashing them all. If you opened with Silver, you should always be able to Chapel Coppers without fear of running out of money in your deck. If you didn’t, be sure to pick up at least one Silver or other +

card on a non-Chapeling turn.

split, the other card you buy with Chapel is usually going to be Silver. However, there are some actions that work very well with Chapel:

, the Cursing attacks are absolutely devastating. In their absence, look for cards that can bootstrap you up quickly (Merchant Ship

), rather than cards that provide late game advantage (City

One little trick in Chapel games is to spare a single Estate from being trashed. A careless opponent, especially in a face-to-face game, will often overlook this, giving you a permanent tiebreaker at relatively minimal cost. (This trick doesn’t work quite as well with other deck-thinning options like Salvager or Bishop

, since there is no similar presumption that everyone has trashed all their Estates.)

(Update: see Donald X. Vaccarino’s response at http://boardgamegeek.com/article/6108150#6108150 . I agree with his sentiment that although Chapel is the most powerful card in the game relative to its cost, it makes the game far better for it.) 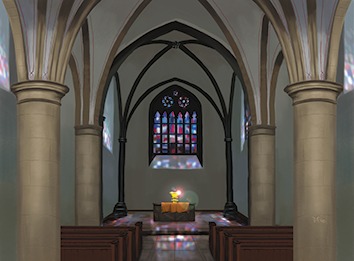 This started out "trash any number of cards" and went to the ever-so-slightly weaker "trash up to 4 cards." I tested a version with "trash up to 3 cards." It was horrible. Just, way slower than the current version, like you wouldn't believe.
—Donald X. Vaccarino, The Secret History of the Dominion Cards