Conclave is an Action card from Nocturne. It's a conditional village that only gives extra Actions if you can play an Action card you don't yet have in play.

The discussion topic for Conclave can be found here.

Conclave is a fairly exotic village. It is a decent engine card that rewards variety; if you have a sufficient amount of variety in your deck, Conclave can become reasonably reliable. Although it might seem similar to, for example, Conspirator

at first glance, it is actually best compared to Festival

; assuming it can hit a different card every time, it gives +

and +2 Actions, making it a cheaper Festival without the +Buy. Usually you will not want to fight for the split, because Conclave becomes more difficult to manage once you get more of them, and also because it does not draw any cards itself.

If Conclave is the only splitter, engine building becomes somewhat tricky but not impossible. Strong trashing helps a lot, as do cantrips and a variety of draw cards. Conclave is particularly useful in these situations because it decreases the need of buying Treasure cards for payload; in fact, you will likely never need Silver 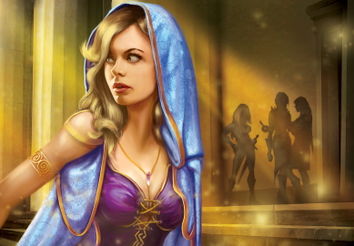 I liked the idea so much on Imp

that I tried it out on a village too. There was a version that did the "you may play a card you don't have a copy of in play" thing twice, then the version that made it out, which lets the second card be a repeat.
—Donald X. Vaccarino, The Secret History of Dominion: Nocturne