Crossroads is an Action card from the Hinterlands expansion. It offers +1 card per Victory card already in your hand. Additionally, the first time you play it per turn, it offers +3 Actions. It is one of two cards in Dominion (the other being Bustling Village 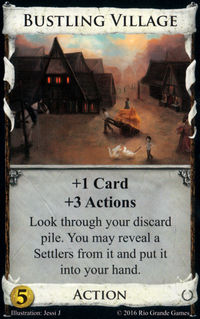 ) which offers +3 Actions in one turn, but unlike Bustling Village is limited to giving the bonus only once per turn. This allows Crossroads to play the role of a village in some engines, but only those that do not depend on too many terminal Actions being played per turn.

Crossroads is a very interesting, unique card. Multiples can serve as both halves of a +Actions/+Cards engine, a strange feat accomplished by no other card save Nobles

. But Crossroads is dramatically cheaper than Nobles and therefore much easier to accumulate. It also has a much better upside: +3 Actions and unbounded drawing power! Compensating for these relative strengths, however, is the tricky coordination required to activate them.

To analyze this card properly, I think it's important to look at two different cases separately. These cases are (1) when Victory cards in hand are always "dead" cards until the end of the game; and (2) when it helps to have Victory cards in your hand. The reason I want to separate these cases is that the mechanics of the card are much easier to understand on an intuitive level if we consider the simple first case first.

[edit] When Victory Cards In Hand Are Dead

and not gained any other victory cards. What does a Crossroads do for your deck? Obviously in this case, all you'll ever get from a Crossroads is +3 Actions. And if multiple Crossroads collide, you don't get anything from the duplicates. How good is a one-time +3 Actions? I would argue that it's not very good. In a 5-card hand, the +3 Actions are only fully useful if 3 of your other 4 cards are terminal actions, or if you have drawing terminals that will pull in other terminals.

Thing is, it's really tough to use this Village-type effect without also having drawing power. If you've ever tried to build a +Actions/+Cards engine with University 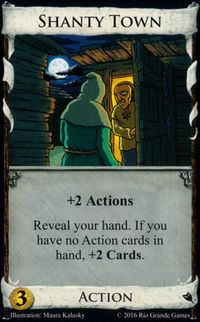 , you know how much that +1 Card on the vanilla Village

really helps. Even the lack of draw on Fishing Village

hurts sometimes. If the draw component of a +Actions/+Cards engine is lacking, getting an extra extra action from Crossroads still leaves you with a draw problem.

But everything I've said so far is probably obvious: the real power of Crossroads is when you get some drawing power out of it. So let's consider the effect of a single Crossroads card in a deck with some percentage of victory cards.

Let's say your deck consists of 50% Victory cards. Given such a deck, a hand of Crossroads-X-X-Estate-Estate is probably quite likely. Now we play the Crossroads, which gives us +2 Cards and +3 Actions. That's pretty spectacular! It's basically the equivalent of a Laboratory and two Villages. Staggering. Now, what do we draw? Remember that our deck consists of 50% victory cards, so if we draw two cards, the average case is that we'll draw one Victory card and one X. Now our hand is this: X-X-X-Estate-Estate-Estate.

But hang on. Isn't this an even worse outcome than our earlier example of a deck with no victory cards? Remember, we're operating under the assumption that Victory cards in hand are always dead to us, so the useful part of our hand is now X-X-X. But in the earlier example, we had X-X-X-X after playing the Crossroads.

Obviously when you have such a deck, some hands will play out better than this, and some worse. But this is not a spectacular average case. Moreover, although increasing the number of Victory cards in your deck will further empower these Crossroads cards, that increase will also space out your Crossroads cards more, making them less likely to collide.

Ultimately, Crossroads doesn't seem very good, does it? Except as an end-game accelerator: buying a mid-late game Crossroads might allow us to start greening earlier without clogging as badly. But that's a pretty narrow application for a card that seems like it should have better potential.

But to understand the situations where it shines, let's take a brief second look at what it actually did for us in the above examples:

The first Crossroads provides us the +Actions component of an engine, but it doesn't really provide +Cards so much as a pseudo-Cellar

, which provides both +Actions and +Cards free and clear.

. They use up an action to play, but now it's possible to accrue more useful cards in your hand than you started with. However, the drawing power of these extra Crossroads cards is somewhat determined by how diluted your deck is. So even if you get a staggering +4 Cards out of a Crossroads, the fact that you can get +4 Cards probably means the cards you draw won't all be useful ones.

Now, certainly there are combo possibilities. If you can play a Scout

before playing Crossroads, not only will Scout increase the drawing power of your Crossroads, but it will increase the quality of the cards you draw with the Crossroads, which is pretty cool. But in the absence of synergy with other action cards, Crossroads is probably pretty bad most of the time.

[edit] When Victory Cards In Hand Are Useful

First, when might Victory cards in hand be useful?

The first three cases here are very situational, though they do occur and you shouldn't forget them. They only apply when such cards are in your deck, and the benefit you get from comboing them with Crossroads may or may not actually be worth the trouble to try to do so.

But the last case can be overwhelmingly strong. Crossroads turn all your Great Halls

, basically, because when you play Crossroads, you draw a card for each one, then draw another when you play each Great Hall itself. Having multiple Crossroads compounds that benefit even further.

, Crossroads does better than drawing an extra card per Nobles: it also allows more of those Nobles to be played for +Cards rather than merely for +Actions, which is huge.

, Crossroads turns each one into an activated Conspirator, sort of, because you get +

from the Harem and also get an additional card in your hand for it.

It's less effective with Island

, however, because the best way to use Island is to get it out of your deck as soon as possible, but it may still help you pair up your Islands with good Island targets.

buy after you've started greening but before you want to start buying Estates.

[edit] When your engine needs longevity through greening

An additional case where Crossroads can shine is when your engine will have to deal with many green cards anyway. If you will need to pick up Duchies, Dukes, or Silk Roads to win, you want to make sure that you don't stall midway though - Crossroads can help. It's particularly good in engines that don't have much treasure and rely on cantrips.

The first time you play Crossroads in a turn, it's like a Cellar

that only works on Victory cards, plus you get those extra Actions. The second time, you still get to draw cards for the Victory cards you didn't have to discard the first time. I imagine Crossroads looks crazy to some of you and well it's no fun if all the cards just look semi-okay.

Crossroads and Fool's Gold both do something different the first time you play them in a turn, but that's not a sub-theme, there are just those two.
—Donald X. Vaccarino, Hinterlands Previews #3

The first version was +1 Action, +1 Card per Victory card in hand. It looked crazy but wasn't very good. Then for a long time it was, +1 Card per Victory card in hand, +1 Action per Action card in hand (you revealed a second time, so ones you drew counted). People were sad to see this go, but I could not justify having a card that meant you sometimes had no clue how many Actions you had and no way to figure it out either. Then it gave +2 Actions, but that version was too strong. Giving you +3 Actions just the first time is cute, and means you can't go too nuts without other cards helping.
—Donald X. Vaccarino, The Secret History of the Hinterlands Cards