Crypt is a Night-Duration card from Nocturne. It functions as duration draw, adding a Treasure to your hand every turn, from a stack of Treasures placed under it when it was played.

Crypt is strongest when 3 conditions are met:

Crypt stashes away Coppers but only temporarily, so it is still out-classed by top-tier trashers like Donate, Chapel, and Sentry.

For this reason, Crypt benefits strongly from appropriate set-up. Trashing Estates allows you to line Crypt up with your treasures more reliably, and draw cards increase your hand size so that you can see more total treasures on the same turn as Crypt. One-time draw cards like Madman or Sinister Plot are especially valuable here, as they can be activated to give you one turn of massive draw to set aside all Coppers at once.

Because Crypt's strength hinges so strongly on the ability to set it up properly, it is almost never advisable to buy on Turn 1 or Turn 2. The risk that you set aside only 1-2 Coppers and gain little benefit from it is too high in those cases.

For setting aside Coppers, the correct play is generally to set aside all of them, but for treasures other than copper, whether to set the treasure aside will be less clear. If you have 5 Silvers in play and set them all aside, you will cause many of those Silvers to stay out of play for multiple turns, which may undercut your deck's payload on future turns.

1. Do not set aside a number of cards identical to the amount remaining on any other Crypt.

2. Set aside every card you are OK with not seeing on the following turn, plus one card.

As a corollary point, it is almost never advisable to buy a new Crypt on the same turn that one of your previous Crypts will be exiting play as they will both be in your deck on the following turn.

For example, suppose you have drawn your deck and are deciding how many of 6 Coppers and 5 Silvers to set aside, and that your goal is to buy 1 Province on the following turn, so you need $8 to remain in your deck. The best play will be to set aside 6 Coppers and 2 Silvers. This leaves 3 Silvers ($6) in your deck, and you will be able to take 1 Silver back off of Crypt, bringing the total to $8. Remember to count treasures that may be re-entering play from other Crypts.

Lastly, Crypt has a strong synergy with Capital. Capital gives $6 up front for 6 Debt the following turn, but the point at which you incur the debt is when Capital is discarded from play. If you set aside Capital with Crypt at the end of the turn, it is never discarded from play and you never take any debt. 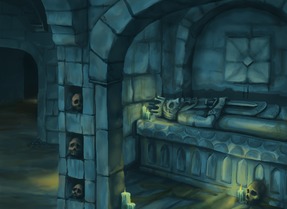 Crypt is yet another Night-Duration card. But unlike most Duration cards, Crypt may stay in play for several turns, providing you with an ongoing benefit. When you play a Crypt, you set aside any number of Treasure cards you have in play, and you get to put one back into your hand as an extra card at the start of each of your turns until they run out. It’s like you got to use each Treasure twice!

Often you’ll just set aside all the Treasures you have in play, but probably not every time. Maybe you’ll play two Crypts in the same turn and want to split your Treasures between them, or maybe you just won’t want to have all of your Treasures trapped in a Crypt. Or perhaps you might prefer them to sit in your Crypt for as long as possible! You won’t have to draw those Coppers for a while.
—LastFootnote, Nocturne Bonus Preview #1: Crypt

A late card, though the set had a history of Night cards that imitated Scheme

. There was a card that put all copies of one card onto your deck, then one that put any two cards on your deck. Then I tried saving a treasure for next turn as resources on a Night card with other stuff going on, then made it its own card. Finally I hit on letting you go nuts with it.
—Donald X. Vaccarino, The Secret History of Dominion: Nocturne