Cultist is an Action-Attack-Looter from Dark Ages. It is similar to Witch

, except that it distributes Ruins instead of Curses

. Since distributing Ruins is a weaker attack than Cursing, Cultist has two extra bonuses to make it balanced at the

cost: multiple Cultists can chain into each other without needing +Actions to do so; and when a Cultist is trashed it gives a +Cards bonus. Whether or not these bonuses make Cultist overall stronger than Witch is a topic of much debate.

There is no strategy article yet for Cultist. Feel free to add your thoughts!

It's got an obvious comparison to Witch

, since it gives +2 Cards and gives out Ruins. But Ruins aren't as bad as Curses

- they don't give negative points, and they give minor benefits. Cultist chains into itself and can be played as a Laboratory

if your only other actions are Cultists, which is pretty nice. Cultist shines over Witch if multiple Cultists are bought early. You can't draw a Cultist dead, and a large amount of Ruins given to your opponents in a short amount of time may make it very difficult for them to recover.

Cultist tends to empty the Ruins pile extremely quickly. As a result, buying Cultists for yourself is often not an effective defense against opponents' Cultists unless you can do so on the same shuffle. If you have already started taking on Ruins then your newly-bought Cultist will probably be a dead card by the time you can play it, as there will be no more Ruins to distribute.

If you're racing your opponent to set up an engine, Ruins will play much like Curses, and Cultist will seem like a better Witch. But remember that you don't have to - a 6/4 Ruins split is much less damaging than a 6/4 curse split if you have something else to make up for it.

Cultist's on-trash ability is perfect for trash for benefit cards. Give out Ruins, and then trash the Cultists once you're done with them. 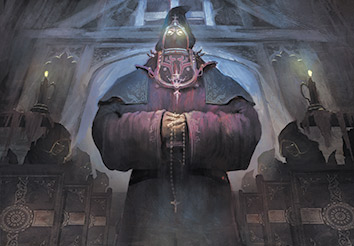 Cultist also does something when you trash it. Those of you who were waiting for a Dominion expansion that let you sacrifice Cultists, finally, here it is. And hey you get three cards when you do it. When you play Cultist, you give people a Ruins, that sounds bad, and you draw two cards, and hey you can play another Cultist. These guys stick together. In fact if your deck’s only actions are Cultists, you can just string them together, like a line of hurtful Laboratories

Attacks need to produce resources of some sort; I know from Saboteur

that people don't like it when they don't (yes the Knights

don't all, but most do). And well I have gone through all of the simple options. So Cultist had a tricky problem to solve: it had to have resources I'd already given out, and not be too powerful, but not look too weak. Initially it gave +2 Cards and said "each other player gains a Ruins. If he can't, he gains a Curse." It could potentially give out 20 bad cards to each opponent. It was like that for a while, but in the end I decided that getting Curses and Ruins at the same time was something to save for when it came up out of the randomizer, rather than something to build into one nightmare card.

less this turn," trying to play into the flavor, but that just never did anything. I gave it a sweet when-trashed ability, but some games you can't trash it; it still needed more than +2 Cards. Finally I thought of letting you play another Cultist.
—Donald X. Vaccarino, The Secret History of the Dark Ages Cards