is an Action-Attack card from Seaside. It is a terminal Silver, since it gives +

when played, but it also makes other players discard Coppers

. It is similar to Militia

when played once, but stacks differently - multiple Cutpurses can make you discard many Coppers.

Part of the reason why I hate multiplayer games. If you’re sitting in 4th position and the preceding players all bought Cutpurse, well, you’re kinda hosed. Even 2-player games suffer from Cutpurse, though it’s not quite as bad as Militia (e.g., if both players draw Militia + 4x Copper, player 1 gets a Gold and player 2 gets a crappy

It’s also a peculiar card, in that it’s the only non-trashing card I can think of that’s only helpful in the opening. Of course, if you have the Action, Cutpurse always provides that +

, but in the late game Coppers 1) are probably gone, 2) are probably hard to hit even if they aren’t, and 3) probably don’t matter anyway. Sometimes this isn’t true, if your opponents are playing some sort of weird Copper strategy (most commonly, Gardens or Coppersmith; Moneylender doesn’t really count since they’re trashing all their Coppers anyway), or if it’s an attack-heavy game and every Copper matters, but frankly I’m usually happy to send my Cutpurse to the Chapel after a couple reshuffles.

That having been said, it’s definitely a brutal attack in the early game. Compare it to Militia, one of the best opening

′s: in the early game, Militia is only superior if you draw no Victory cards. But even then, Cutpurse is not really all that worse: this ordinarily means a hand of 5 Copper. Militia drops you down to

, and Cutpurse down to

. Either way, the damage is done: it’s cutting you off from the

that really hurts. (The rare exception is if you hit a Silver + 4x Copper hand, whereupon Militia gets you down to

but Cutpurse only to

. But even then, going from

is still much worse than going from

.) And in multiplayer games, as alluded to before, Cutpurse stacks, but Militia doesn’t.

(One can only imagine how ridiculously brutal Cutpurse used to be, when it read “+

; name a Treasure card; each other player discards it.”)

In other words, Cutpurse is probably one of the best early game attacks, along with Sea Hag, Militia, and Ambassador. If you’re feeling especially vindictive, an early second copy of Cutpurse can work wonders.

Finally, when paired with Chapel (or similar early trasher), Cutpurse works similarly to a Militia/Chapel opening, in that it is a good way to boost yourself up while hurting your opponent’s trashing. As if first player didn’t already have enough reasons to celebrate Cutpurse being in the set. 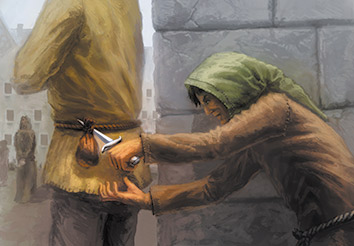 This started out as "Cards cost

less this turn, then

more until your next turn." That doesn't have the same timing as the other duration cards - it goes away at the end of the previous player's turn, rather than at the end of your turn. The developers didn't like that. I replaced it with "+

, name a treasure card, each other player discards it." That was quite strong. You don't have to discard Gold very many times before you're sick of it. I reined it in by having it only hit Copper. It's still quite annoying if multiples get played against you early on.
—Donald X. Vaccarino, The Secret History of the Seaside Cards