Dame Molly is one of the ten Knight cards from Dark Ages. Like the other Knights, she is an Action–Attack that trashes other players' cards. She is also one of the villages since she gives +2 Actions—the only such Attack card.

page. The points specific to Dame Molly are reproduced below. 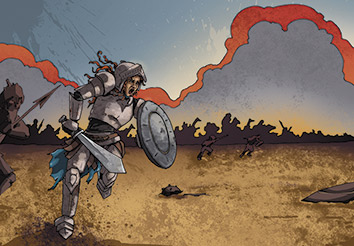 Dame Molly is named after a friend of Donald X. Vaccarino's who played the first game of Dominion and suggested the "spendy" theme that became the Prosperity expansion.