Dame Natalie is one of the ten Knight cards from Dark Ages. Like the other Knights, she is an Action–Attack–Knight that trashes other players' cards. She is also a gainer, allowing you to gain cards costing up to

-cost cards and let them get trashed! 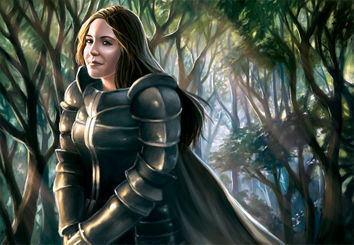 Dame Natalie is named after one of Donald X. Vaccarino's daughters. She was too young to be depicted in the card art.