Dame Sylvia is one of the ten Knight cards from Dark Ages. Like the other Knights, she is an Action–Attack–Knight that trashes other players' cards. She is also a terminal Silver.

A terminal Silver is a pretty good bonus for an attack to have - you're not giving up any economy by buying Dame Sylvia. Unlike other Knights, which might not be worth much for your current hand, Dame Sylvia won't slow you down - unless you're short on Villages. 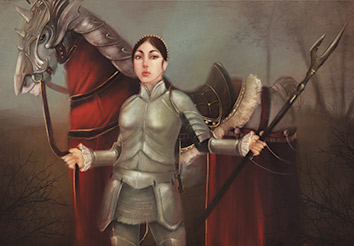 Dame Sylvia is named after one of Donald X. Vaccarino's daughters. She was too young to be depicted in the card art.