A deck inspector is a card that lets you reveal or look at one or more cards at the top of your deck. Deck inspectors that are also Attacks, like Spy

, tend to look at fewer cards than those that aren't, like Scout

. These cards can allow you to discard or trash undesired cards, draw a particular type of card into your hand, or simply rearrange their order.

In order to be a deck inspector, it has to:

Attack cards that look at the top of an opponent's deck are considered Deck inspection attacks.

While deck inspectors tend not to directly provide useful resources, such as coins or cards, or at least not in any significant amount, deck inspectors can be useful to make your current or next turn go more smoothly. For example, using a Cartographer

or two to filter out less useful cards, and to ensure cards are drawn in the right order, can give a noticeable advantage to that player in a mirror match.

Deck inspectors do not interact with the -1 Card token; the token is put back on your deck once the card is done inspecting, if the card did not draw any cards first. 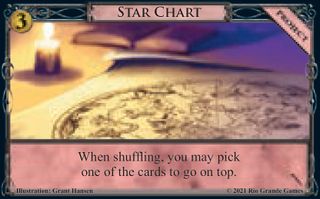 acts like a deck inspector, in that it allows you to choose what card will be at the top of your deck when you shuffle.