Delve is an Event from Empires. Its presence in a game essentially makes Silver

cheaper and not require a Buy to buy.

Delve is a very good card for

, allowing you to gain a Silver

, and it doesn't even use up a buy. Opening

can get you 3 Silvers, fantastic in a Big Money game. Another neat time to use it is whenever you have

more than you need for buying the card you want to buy, eliminating those pesky 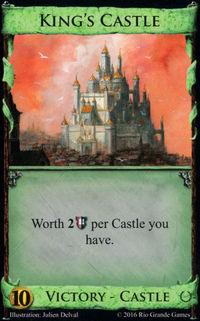 !) Delve is also good in these situations:

It's not so good in Prosperity games with Platinum

, because Silver in a Colony game is only somewhat better than Copper

game, especially with all those swanky Treasures in Prosperity.

This was an idea from Adventures that I never got around to trying there. It's the only one of those I tried, and it worked great.
—Donald X. Vaccarino, The Secret History of the Empires Cards