Diadem is a Treasure-Prize card from Cornucopia. It is not in the Supply, and can only be gained through playing the Tournament

card. It gives you

for each unused Action you have—amazing when you have an engine with too many villages, but not useful in Big Money games.

There isn't a strategy article for Diadem.

It's a great card to pick up if you, for whatever reason, have an oversupply of Actions. Maybe you built a City

, and +Buy, and don't have enough terminals. Maybe your Throne Room

engine is generating a huge surplus of Actions.

However, in a Tournament game, this will rarely be the case, since Tournament games are often a race to the first Province, with no time to set up a huge engine. Even so, Diadem will often be worth

, and can be a good Prize to take if the situation demands it. 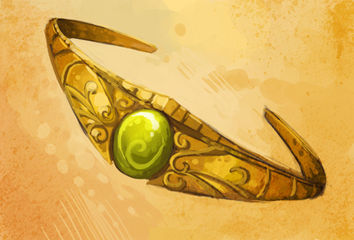 Diadem started in the large version of Alchemy long ago, as an Action: "+

. Return this to your hand." It was a cute combo with Villages, but useless without them. I then tried some "choose one" versions, which solved the problem of it sometimes being dead, but didn't make the actions-to-money part any better. I eventually gave up on it, and well here it is at last.
—Donald X. Vaccarino, The Secret History of the Cornucopia Cards