Distant Lands is an Action-Reserve-Victory card from Adventures. It's an Alt-VP card worth more than Duchy

at the same cost, but has to be played (and put on your Tavern mat) before you can get those points. As it removes itself from your deck in a fashion similar to Island

, Distant Lands can be part of a strategy that buys and plays them constantly during the game, building up

long before you would usually start greening.

There is no strategy article for Distant Lands, but it has been discussed on the forum.

Distant Lands is an interesting and difficult card to play well. It gives you 4

, which is more than a Duchy

at the same price, but only if you manage to play it before the game ends. It is very cost-effective, even more so than a Province

, although you do need an extra source of +Buy for it (for example, you could swap out a Bazaar

for a Worker's Village

. On top of it, they remove themselves from your deck, like an Island

that only works on itself.

Naturally, because you want to get through your deck quickly and need a surplus of Actions, Distant Lands is best used in a big engine. You should be careful when buying them; if you lack the terminal space (meaning: you don't have enough Villages

to play them all), or you don't manage to draw your deck, they do become a dead weight and don't even give you the points you want. So if your engine is more powerful, Distant Lands gets stronger exponentially; you get rewarded for overbuilding and overdrawing your deck. Also, because it's such an efficient source of

, you have more time to build. Even if your Big Money opponent gets almost all the Provinces, you can easily come back. 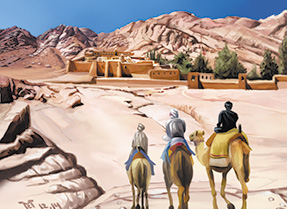 -Reserve card? It's a

card that isn't worth anything unless you manage to play it once. A simple concept that just immediately worked.
—Donald X. Vaccarino, The Secret History of Dominion: Adventures