The strategy is also applicable when opening

If you plan on trashing both revealed cards, you will trash 2 Estates (30%) and most likely get

on your second turn, or trash an Estate and a Copper (60%) and get

. If you reveal 2 Coppers (10%), trash the first and discard the second and get

. On your second turn, you might draw your Doctor instead of a Copper (33%, or 17% if you put back the second Copper) meaning that you will actually get one less coin for the turn. In those cases, your remaining Estates are already in hand, so Doctor can only trash Coppers. Be careful of trashing too many Coppers too quickly.

When using either opening strategy, opportunity cost is an import consideration. If there are important early

cards, such as Witch

, it may be better to open with those. 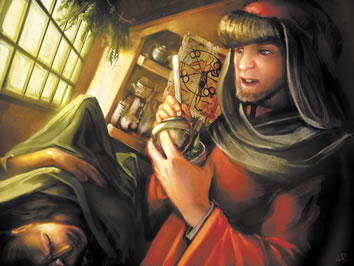