Embassy is an Action card from Hinterlands. Its draw-five-discard-three offers incredible sifting and cycling for your deck. It is so good, in fact, that it gives your opponent a bonus

when you gain it! The mechanics of the card make it more suited to Big Money, but it still plays well with any engine which has actions to spare.

Embassy most closely compares with Vault

when played. Both cards deal with greening rather well, and both give some benefit to your opponents.

The difference is that Embassy trades some of the reliability of Vault for incredible deck cycling. Vault is a guaranteed Gold, and a guaranteed Province with a Gold in hand. Embassy is not, but it's still a good bet. The deck cycling makes Embassy somewhat better than Vault in engines, whereas Vault ends up being better in big money, but Embassy is no slouch there, either. Still, Embassy only increases your hand size by one. So if you plan on drawing your deck or if you have a refined deck, something which offers +3 cards may be preferable.

One very important combo to point out is with Tunnel

. Embassy gives the largest pool of cards to discard Tunnel from at 9. You'll also get around to playing those extra Golds incredibly fast.

The effect of the on-gain ability is highly situational. In most situations it is not a particularly strong effect, but early in the game, the extra silver your opponent gains can be a major boost. This makes the card a poor buy in most

openings, although less so if you are the second player and buy the Embassy on your second turn, so their gained silver misses the first reshuffle. Later in the game, the silver is less beneficial as it will be closer to the average value of their deck, and in some cases (such as a highly-trimmed engine that does not rely on treasure, like a Minion

deck) the silver could even be detrimental. 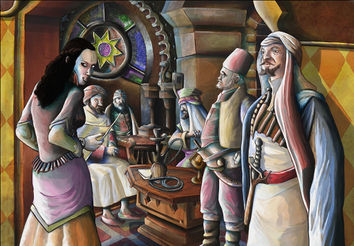 I had had "draw five discard three" in Prosperity a long time ago. It had been too strong, but it didn't seem like it needed much to make it acceptable, so a when-gain penalty was a good fit. Giving the other players a Silver doesn't matter much in the long run, but on turn one it's significant.
—Donald X. Vaccarino, The Secret History of the Hinterlands Cards