Explorer is an Action card from Seaside. It is a gainer which can let you gain Silver

directly into your hand - and sometimes Gold

, if you match your Explorer with a Province

. Explorer naturally leads to a Big Money-like game since it floods your deck with Treasures, and indeed it shines in Big Money-like games with alternate Victory cards, but it can also be used to fuel a trash for benefit engine. It's not the best

Action ever, but it has its uses.

Article by gman314, originally posted on the forum

Explorer has two different abilities: the first is that it can gain a Silver

, the second is that it can gain a Gold

. Of course, the second ability is strictly better than the first, which is why it’s a conditional benefit. But even when you get it with a Province, it’s basically just +

card would cost somewhere around

at the best of times, it looks pretty silly at

. The real point of Explorer is that it gives you

every time you go through your deck. And, since you gain the money in hand, you get the benefit starting immediately.

Comparing Explorer to other cards

There are two cards which seem quite obvious as comparisons for Explorer. The first is Mine

. Like Explorer, Mine gains Treasures directly to your hand. Similarly, Mine adds

to your deck every time you go through it (without extra treasures, that is) while Explorer adds

The other difference being that while Explorer adds extra cards to your deck, Mine only replaces cards, which means that in a long enough game you’d see your Mine more than you’d see your Explorer. But that also means that Mine runs out of useful things to do (when you don’t draw it with Copper or Silver in your hand) before Explorer (which is good until the Gold and Silver both run out).

. What makes these cards weaker? The simple fact that getting a whole pile of money won’t be competitive most of the time. On most boards, some sort of engine should be able to dance all over Big Money and that’s exactly what all your treasure leads to. You generally don’t want much treasure in an engine if you can avoid it, and while Mine just refines what you have, Explorer adds cards to your deck.

The other comparison for Explorer is Tournament

. This is because both want you to match them with a Province. However, they play very differently because of the difference between Gold and Prizes. That being said, ideas from Tournament do carry over to Explorer, particularly deck drawing and the value of trashing, as will be discussed below.

More subtly, you can compare Explorer to Hoard

. Both of them really illustrate the weaknesses of Explorer; they give you +

but provide much better options.

Explorer’s role, and the type of deck you stick it in, really depends on which of its abilities you use it for most of the time. The most basic ability of Explorer is to gain Silver. This ability is generally looked down upon simply because Silver isn’t really that great. Silver gets you to

and Golds get you to Provinces. And in a Colony game, Silver doesn’t get you very far at all. Unless…

In most alt-VP strategies (Silk Road

, etc.), money is good. Especially Silver! Even if you never get a Province, you need some money to keep your strategy going. You’re filling your deck with green and so you need to add some money to actually keep buying your green. But you want to use your buys on your alt-VP and the Silver is unlikely to run out. So use Explorer to gain Silver instead of buying it! Since you get in your hand, there’s not a downside to having the Explorer this turn, because the Explorer means you get to both gain and play the Silver. With the extra Silver from a few Explorers, you can keep your Gardens/Silk Road/Duke/Feodum strategy going strong.

Another case where boatloads of money is a good thing is Big Money. Just play your Explorers for Silver and when you get lucky, get a Gold. Just as with alt-VP, the power of gaining Silver outside the buy phase helps you green. The problem is that there are a lot of helpers for Big Money that do the job a lot better than Explorer does, and especially at the

. Explorer helps Big Money, but your buddy with the Wharf

-Big Money deck will stomp all over you.

Worth mentioning here is the opening of Explorer/Chapel

. Get rid of your deck, get some Silver, get a Province and get a whole pile of Gold. But, this is just a special case of the next case which is….

Finally, we have the very strange case of Explorer in an engine of some sort. Just like Tournament, Explorer is at its best when you can get it with a Province. Perhaps you can set up a particular engine that can draw the Province/Explorer every turn.

This can be a good way to get some money into your deck, especially if you are running some kind of trash-for-benefit engine. Consider Apprentice

. You need good cards to trash, but as you trash them, your deck gets worse and worse and you run out of appealing targets. And you certainly don’t want to trash all your Golds, such that you can draw your whole deck but not have enough money for a Province any more.

The other case of an Explorer engine is the general case of Explorer-Chapel. In many Chapel openings, it’s possible for your engine to accelerate ahead of your cash flow. You find yourself drawing your deck with 3 Buys, 5 extra Actions and hardly any money. Solution: Buy an Explorer! It builds the money into your engine! You gain money on your action phase so you can keep buying Engine parts or Provinces, and it’s in hand, so you added +

to your current turn! And if you keep drawing your deck, you’re gaining nothing but Gold! It’s spectacular!

And a final note on that automatic engine-creation card: King's Court

. Setting up KC-Explorer is not a great move on its own, because playing it decreases the chance that future KCs will hit useful stuff. But in a pinch, it can be used to add money to your deck; suppose you have a lot of Quarries

and Action-card-gainers, but no actual money? KC your Explorers and add a ton of your money to your deck at once, for the final turn buyout.

As always, something needs to be said about what attacks do to the card. The damage of Cursers depends on what you’re trying to do. If you’re relying on matching with a Province, you’re going to have a bad time if there’s Curses in the game. But if it’s a slog where your deck is full of Curses and you can’t seem to hit

no matter what you do, Explorer is a reliable way to slowly improve your deck. This really applies to any case where the pace of the game is just knocked down, which can also happen if there’s too many Militias

flying around. Hand size decreasers only hurt as much as they hurt the type of deck you’re building, because Explorer probably isn’t really the key card, but rather a helper. If you’re trying for some sort of Explorer/Warehouse

combo, a Militia hurts because it hurts Warehouse. Alternatively, a Library

engine can easily withstand Militia. Probably the most damaging attacks for Explorer are Thief

because of all that money you have. With them you definitely have to think carefully about buying Explorer.

A fun note about Possession

: If a player possesses an Explorer, the Possessing player gains the treasure, but not in hand. So, the primary value of Explorer (gaining in hand) is lost. 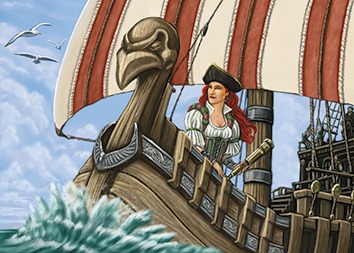 At first this did nothing unless you revealed a Victory card. If it was a Province you got Gold, otherwise Silver. That version wasn't good enough, and eventually I dropped the requirement - you get Silver even if you don't reveal anything.
—Donald X. Vaccarino, The Secret History of the Seaside Cards

Explorer is fine, why do people even complain about Explorer. They can’t all be the best

ever.
—Donald X. Vaccarino, What Donald X. Might Do With a Dominion Time Machine