Fear is a Hex from Nocturne. It is a handsize attack that forces you to discard an Action or Treasure from your hand (if you have at least 5 cards in hand).

There were multiple versions of the discard attacks, with Poverty 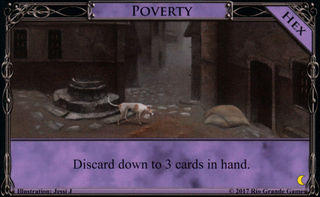 leaving and then coming back. One tried to have you discard a copy of your top card, which missed too much. At one point I tried "discard an Action" and "discard a Treasure," at Billy's suggestion. They take way way more words than that and were not great. Billy suggested putting Minion in but I didn't enjoy it and so in the end there's Fear, also Billy's suggestion.
—Donald X. Vaccarino, The Secret History of Dominion: Nocturne